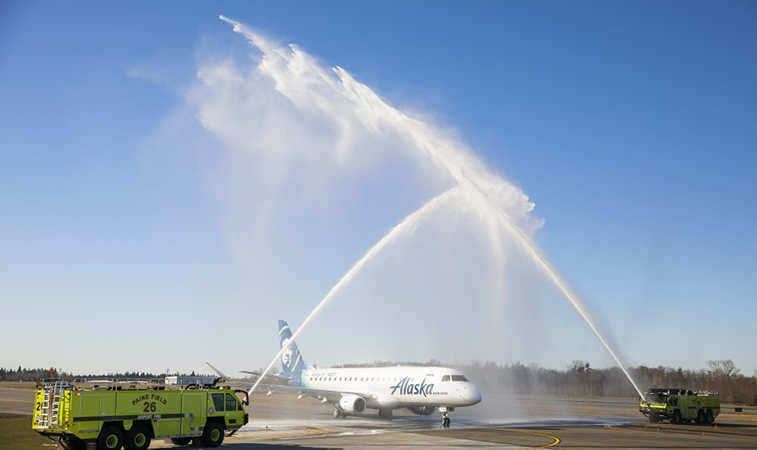 Palm Springs passed three million seats for the first time last year, up by 67% since the start of the decade.

This propelled the airport up ten places in the top-100 US ranking list, ending last year at 85th.

This increase in seasonality in Q1 2019 was primarily from across-the-board additions, with only WestJet not growing. And JetBlue began Boston.

But it was primarily because United, Alaska (including a new service to Paine Field), and Air Canada grew especially strongly.   The latter more than doubled capacity, with a new Calgary service (since ended) and almost twice as many seats YOY to Vancouver.

Palm Springs is to welcome 10 routes and a new airline before Christmas 2020. And Southwest is coming too, although nothing is yet confirmed.

This is all despite coronavirus – or perhaps because of it.

After all, of what demand there is now, ignoring seat factors and unit revenue, most is leisure.  Chasing the leisure dollar is increasingly important for cash generation.

This is seen in the US with JetBlue and American and others, recently with TAP Air Portugal and Lufthansa in Europe, and others elsewhere (e.g. Qantas beginning Canberra – Gold Coast).

Palm Springs’ coming routes will have a total 54 weekly frequencies each way, with Allegiant to begin two new routes.  Back in 2011, Allegiant began Palm Springs to Stockton, its first intra-California service.

Boise stands out.  It’ll go from zero to 13 weekly across two carriers.

Alaska Airlines’ service to San Jose will mean that the winter desert destination will now be linked with four California airports.   It had ~11,000 passengers and Palm Springs’ 17th-largest unserved.

Other unserved destinations within a reasonable distance (rather than to the East Coast) include: 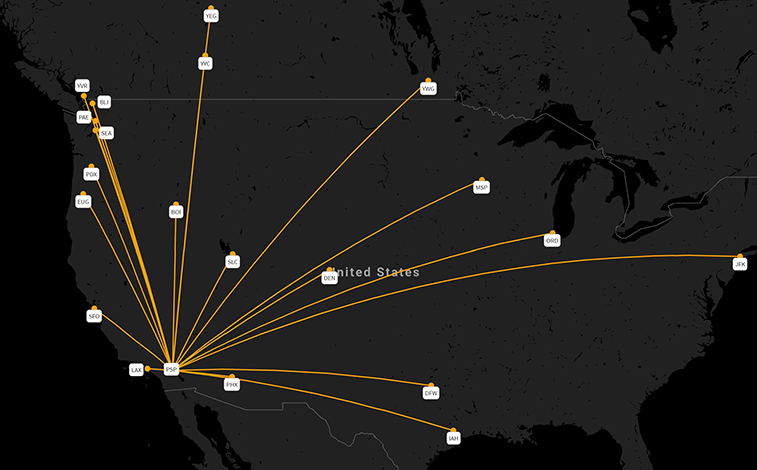 Looking at the randomly chosen shoulder week starting 23 November, Palm Springs has 354 weekly frequencies each way – up by 52, or 17%, YOY – according to both OAG data and airline websites.

It will have 20 routes and 11 routes in this week, with San Francisco top with 70 one-way frequencies split equally between United and Alaska.

Boise and Winnipeg, meanwhile, will have just two weekly services each  – in the case of Boise, until the following month.  (Allegiant’s Boise service starts at three-weekly but varies between two and three depending on the week.)

In this November week, Los Angeles is up by 13 weekly frequencies YOY – once-daily to 20-weekly – from both Boutique Air and Delta beginning it alongside United.  LAX will now be Palm Springs’ joint-eighth destination.

United and Alaska will be by far Palm Springs’ top airlines by weekly frequencies, responsible as they will be for almost half of its total.