We explore easyJet’s top-10 most profitable airports, following on from our recent look at Ryanair’s.

Gatwick is easyJet’s most profitable airport, with an approximate €185 million. It is also by far its largest airport by seats; we explore it below.

In contrast, Stansted – Ryanair’s largest – was recently shown to be only its fifth most profitable.

The UK and France are easyJet’s most profitable countries, RDC shows, reflected in the table that follows.

Bristol stands out.  Of all of easyJet’s airports, it is its ninth-largest – but its third most profitable, with almost €69 million.

Bristol had the highest profit margin, with the LCC responsible for nearly 60% of the airport’s seats in this time period. Its network of routes there is similar to Gatwick: a wide mixture of domestic, leisure, sun, and business destinations. 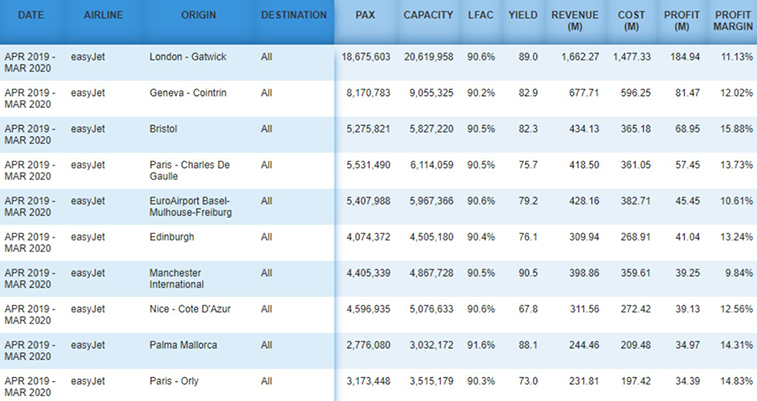 Berlin Tegel, Milan Malpensa, London Luton, Amsterdam, and Belfast International – all within easyJet’s top-10 list by seats, OAG data shows – were not in its top-10 for profitability.

Tegel, at which the LCC expanded rapidly following the end of airberlin, is easyJet’s second-largest airport.  The airport is the main reason for Germany being the carrier’s biggest loss-making country.

easyJet had 68 routes from Tegel in the year to March 2020, but expect meaningful changes as part of a major rationalisation programme.

Malpensa, meanwhile, is easyJet’s fourth-largest airport.  The carrier’s performance at Malpensa clearly won’t be helped by Wizz Air creating a base there and strongly expanding into easyJet territory, mainly to Greece and Spain. In full-year 2020, the pair competes directly, or will, on 15 routes.

However, five airports that do not lead by size – Edinburgh, Manchester, Nice, Palma, Paris Orly – all performed stronger by estimated profitability.

Palma had the lowest capacity of those in the list, but it benefited enormously from peak summer performance when its network nearly doubles with its summer-seasonal base, which was opened in 2017.

No doubt easyJet would like more summer Palma flights if slots were available.  However, many have been taken by Ryanair following its aggressive expansion from the airport over the past few years. 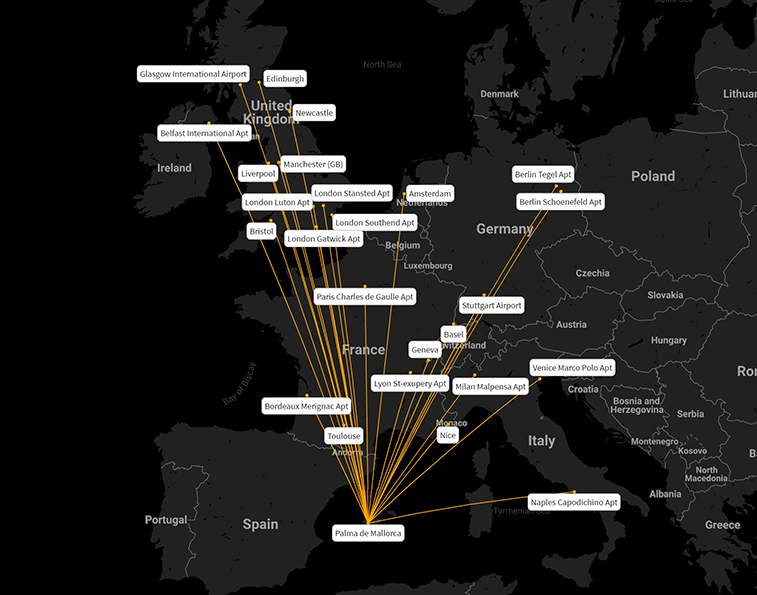 easyJet’s Palma network in the year to March 2020. Since then, Southend, Stansted, Newcastle, and Stuttgart have all ceased, the first three because of base closures. Sources: OAG Mapper.

Leading positions at primary airports (or otherwise significant airports) is of strategic importance for easyJet, as its investor relations documents show.

It was number-one at six of its top-10 most profitable – Gatwick, Geneva, Bristol, Basel, Edinburgh, and Nice – which includes its top-three.

It ranked second at Paris CDG and Manchester, third at Paris Orly, and fourth at Palma.

Geneva was easyJet’s second most profitable airport with an estimated €81.47 million. It was also its third-largest.

easyJet had a 40% share of Geneva’s seats in the year to March, unchanged since 2016 despite adding 1.1 million seats at the airport since then.

It had 78 routes from the Swiss airport, up from 40 back in 2010, with Gatwick, Barcelona, Porto, Nice, and Luton its top-five.

At the other end, Aberdeen was its least-served route, with just a four-month and once-weekly offering between December and March obviously for skiing.

The UK was easyJet’s top market from Geneva, with a 27% share of seats, rising to almost half when France is included.

easyJet will begin a new route from Geneva – to Valencia – from March 2021, for a total of 14 Spanish destinations.

Gatwick has one-fifth of easyJet’s seats

Only five of its routes involved the Middle East or North Africa: Agadir, Aqaba, Hurghada, Marrakesh, and Tel Aviv.  However, Sharm El Sheikh is returning on 17 October on a three-weekly basis after a five-year absence, while twice-weekly Enfidha will start from 1 May.

Before the ban, all airlines on Gatwick – Sharm had over 364,000 passengers. 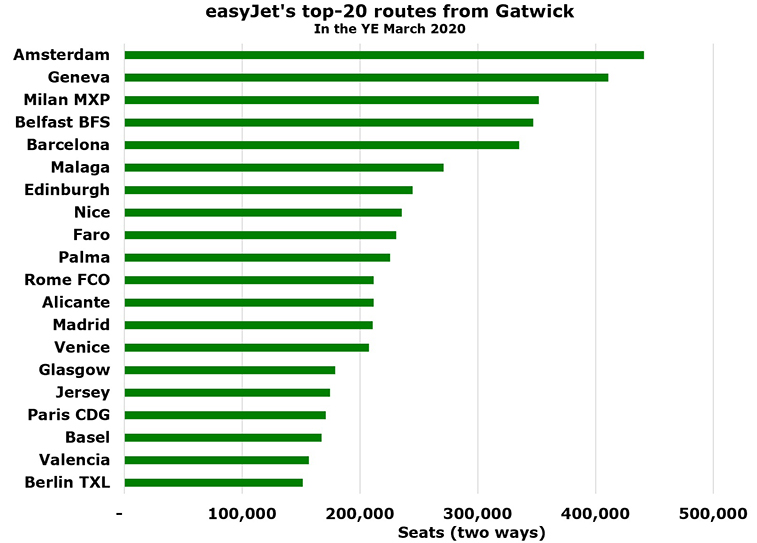 Fare performance for easyJet at Gatwick

Destinations well above the trend line tend to be Greek islands, Turkish resorts, and summer-seasonal places like Split, Corsica, and southern Italy, together with thin winter destinations.

Such places tend to do very well for easyJet, with RDC indicating strong profit per seat and high margins. However, passenger volume can – for some routes – be very low.

Indeed, for easyJet as a whole and despite longer sector lengths, Greece is its fifth most profitable country, Croatia eighth, and Turkey tenth.

Aarhus (AAR) and La Palma (SPC), meanwhile, were both cut from easyJet’s Gatwick network in March 2020.

Other routes that have a similar level of underperformance include Tel Aviv (TLV) and Aqaba (AQJ).  These routes are vulnerable unless there are attractive incentive schemes in place or if they are strategically important.

Tel Aviv’s performance is probably not helped by being winter-only. 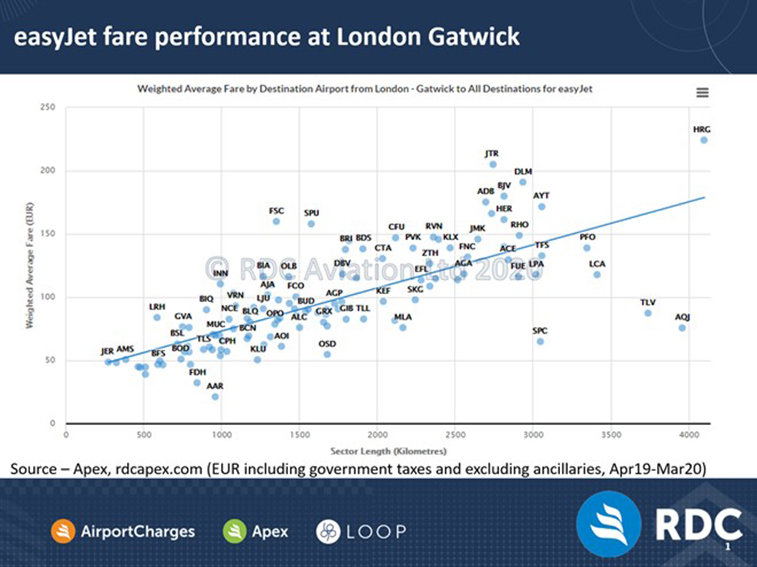