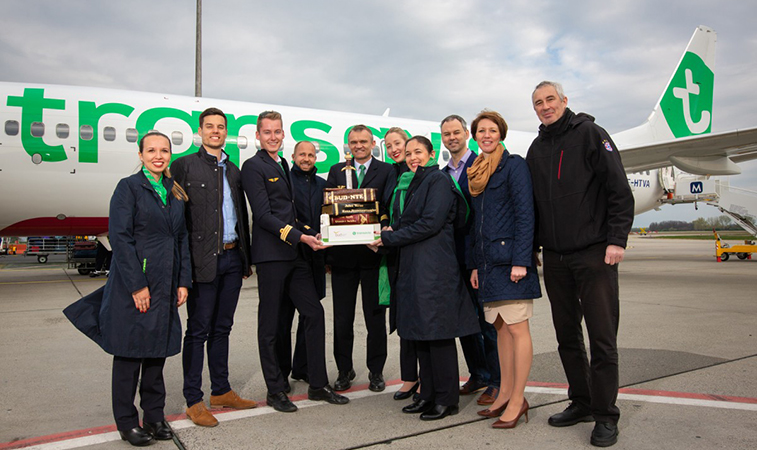 Transavia passed 18 million seats for the first time in 2019, if both its Dutch and French AOCs are combined

Transavia is, after all, primarily focused on summer-seasonal leisure destinations and North African VFR markets.

Country focus does vary greatly by individual AOC, however.

The Dutch unit revolves around Spain, by far its top nation, with 42% of its AOC seats.  For Transavia France, however, Portugal is its number-one, followed by Morocco and Spain.

The pair’s capacity more than trebled since the turn of the decade, with both AOCs adding nearly the same volume: Transavia (6.2 million) and Transavia France (6.4 million).

Transavia’s big growth in 2016 was helped by its short-lived Munich base and its multi-country growth from the Netherlands that followed. 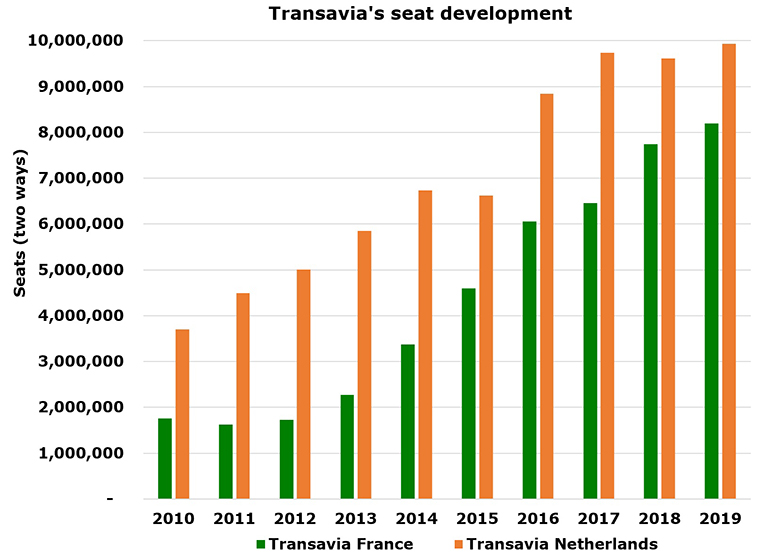 Transavia France grown by a CAGR of almost 17%

Transavia France started the decade from a base half the size of its bigger brother, and since then it has grown by a very strong CAGR of 16.6%.

This pushed the French unit’s share to over 45% in 2019 – its highest to date, aided by almost zero growth in recent years by its Dutch counterpart.

Its development continues to be driven by union agreement.  You can tell when accord has occurred, such as in 2014 and the resulting growth thereafter.

Transavia France can now grow without any limit on aircraft numbers (it was previously 40) and it can now operate domestically within the country.

This is something that will be of growing importance to the Air France-KLM Group going forward, with Transavia France expected to increasingly replace Air France and Hop! at Paris Orly, Lyon, Nantes, and Marseille.

Over 60 routes expected for Transavia this year…

Many have happened already, including from:

Still others have been postponed until next year because of coronavirus.

It will be interesting to see what happens to Nantes – Dakar, a 3,884-kilometre service that was to operate once-weekly this year.

Significantly, Transavia was also to begin its new Brussels base in S20 with two B737s, which has been postponed until S21.

While it might change, it is expected to have nine routes: Agadir, Alicante, Corfu, Heraklion, Ibiza, Faro, Malaga, Thessaloniki, and Tel Aviv. 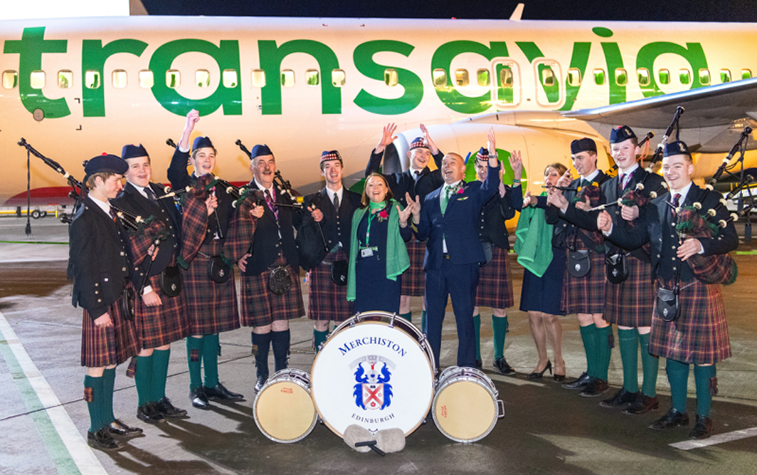 … including its first domestic flights

Coming in W20 are five domestic French services, an important development at Group level because they were previously banned.

On 2 November, Transavia France will begin Nantes to Marseille, Montpellier, Nice, and Toulouse, and it will start Biarritz from Paris Orly.

A big question remains over whether transferring routes to the lower-cost subsidiary is sensible and whether it will – if scaled up – negatively impact Transavia’s own performance.  Vote at the bottom of this article!

After all, Air France’s total domestic network lost over €200 million last year.  Will the LCC’s lower cost base be sufficient to meaningfully improve Group performance? 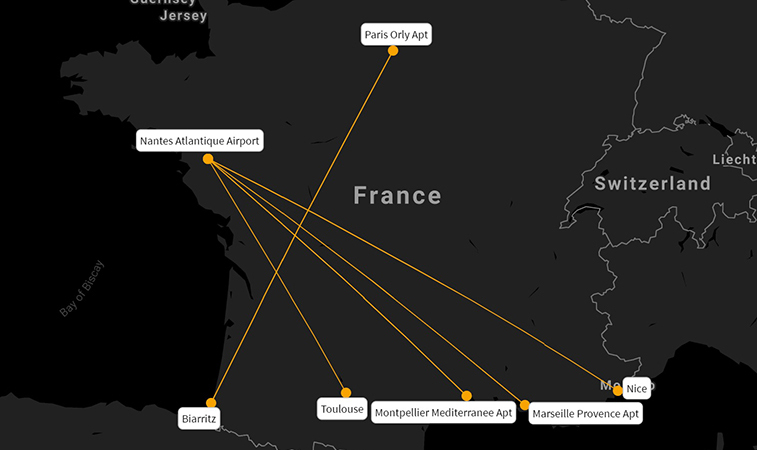 Transavia collectively has 857 flights and 127 routes in early October

Transavia’s two AOCs collectively have an estimated 857 two-way flights across 127 routes in the week beginning 1 October.  This is down by 60% and 43% respectively YOY.

Unlike the same period in 2019, when Amsterdam had 100 more flights in a week than Paris Orly, it is the French airport that now has more.

This is because Transavia’s frequencies at Schiphol – often the busiest airport in Europe during coronavirus – are down by 63% YOY against half for Orly.

Indeed, while both airports were almost the same for the number of routes in the week last year, in October this year Amsterdam has 27 and Orly 44. 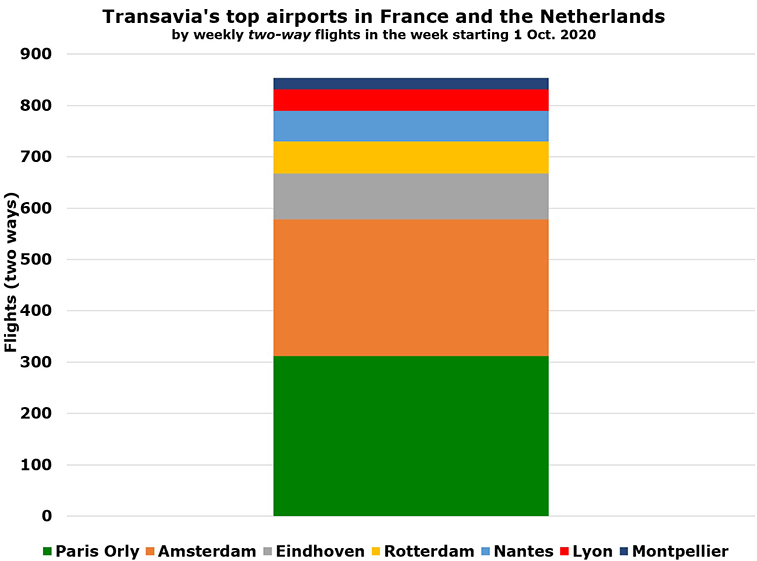 You would be forgiven for thinking that Orly isn’t bigger given how infrequently it appears in the following figure for routes with seven or more weekly frequencies.

Despite more routes from Orly, they typically have lower frequencies.

Reflecting the importance of Portugal to Transavia generally but also given coronavirus and quarantining, the carriers now have more weekly two-way frequencies to Portugal (226) in this week than to Spain (204).

Portugal features seven times in the figure, including taking the top four spots with by far the highest frequencies. 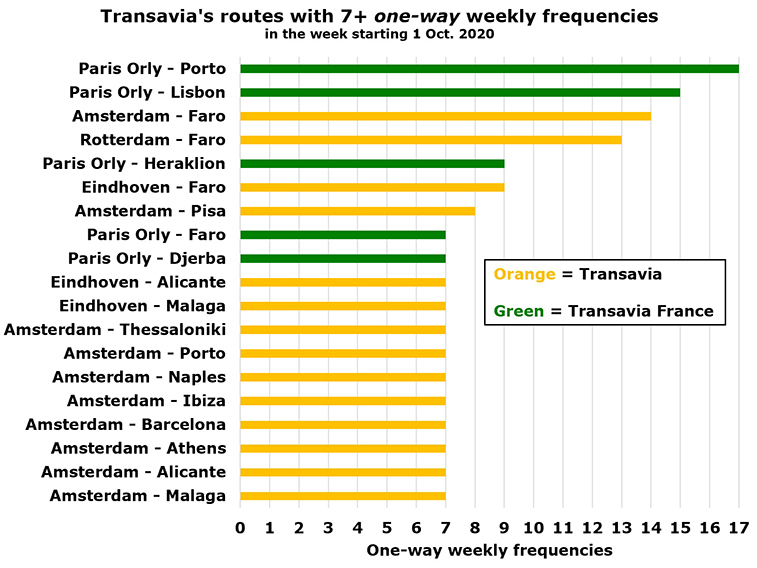