There has been a lot of focus on flybe’s domestic market and which routes have been taken up by others.

And given flybe’s network, aircraft, and focus on convenience, it was the top player by frequencies with more than easyJet and British Airways combined. (It was second by seats.)

Last week (24 September), both Eastern Airways and Loganair announced Manchester – Newquay on the same day, with this one of the last unserved ‘bigger’ former flybe routes within the UK.

Along with Blue Islands and Eastern Airways taking over routes, Aer Lingus Regional has recently taken up six from Belfast City that had over one million passengers between them, and Loganair has started or planned many, including Isle of Man – Manchester.

However, there has been far less discussion about flybe’s international routes, which numbered 77 in September 2019.

flybe’s international network in September 2019. Southampton had the most flybe international routes of any airport, mainly to regional France. Source: OAG Mapper.

78% of flybe’s international routes unserved, a drop of 342 weekly frequencies each way

The carrier had 478 one-way frequencies on its international services in a typical week in September.

In September 2020, however, other airlines have just 136 one-way flights – a drop of 342, equivalent to nearly 50 daily departures.

Perhaps this isn’t surprising given the current environment. More fundamentally, it probably reflects route performance by flybe, the result of its low-capacity aircraft – ATR-72s, Dash-8-400s, and Embraer 175s and 195s – on many of the routes it chose.

However, four more routes will be coming later this year: three because of Wizz Air’s new Doncaster base and the launch of Alicante, Faro, and Malaga, together with both Blue Islands and Eastern Airways starting Southampton – Dublin.

Most of the following is based on the week starting 25 September, but some are from earlier in the month to include more routes.

Of the 17 routes that are served in September 2020, it isn’t surprising that seven were in flybe’s top-10. These are ordinarily operated by more than one operator anyway and are generally good-sized markets:

Depressed demand from coronavirus has necessarily meant that the YOY change for most of these is worse than it would otherwise have been. 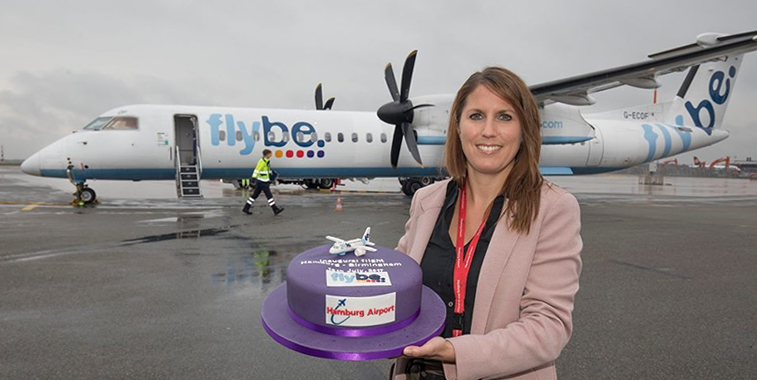 Southampton – Amsterdam had the biggest fall YOY at -21 weekly departures.

This is despite KLM restarting the route last month, albeit on a five-weekly basis (down from the planned daily) versus 26 with flybe.

Southampton – Dublin is currently unserved despite being a core international route for flybe with 20 weekly frequencies. However, as mentioned above, this will change next month when two operators begin it; together they’ll have a 16-weekly offering in early November.

The biggest drops on unserved routes and routes that haven’t been announced are: 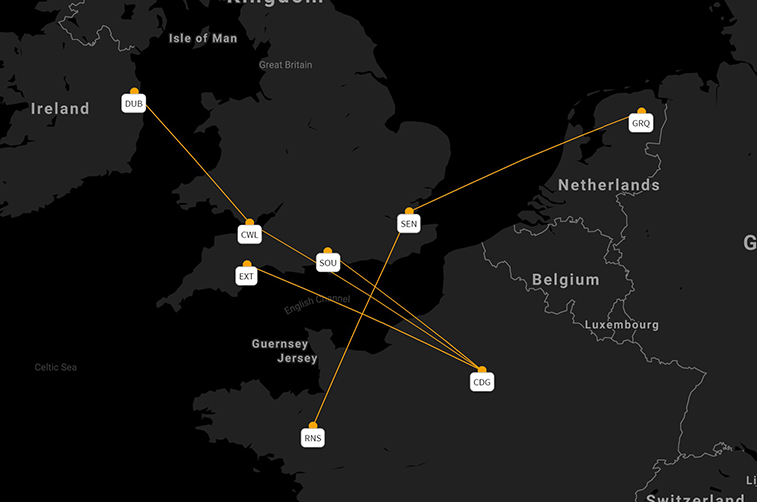 flybe’s routes that had the highest weekly frequencies and which are unserved and haven’t been announced. Rennes and Groningen are unserved from London. Source: OAG Mapper.

Looking at eight airports, Southampton is the worst impacted on an absolute change basis, with weekly one-way flights down by 96.

Last September, flybe had 18 international routes from the airport and 101 departures a week, of which nearly six in ten were to Amsterdam, CDG, and Dublin.

Half of flybe’s Southampton’s routes were to regional France, such as Avignon, Bergerac (six-weekly), Nantes, Perpignan, and Toulon.

Birmingham, meanwhile, is down by 67 weekly departures from reduced service to Amsterdam and CDG together with the loss of 10 routes: Bastia, Berlin Tegel, Bordeaux, Hamburg, Hannover, Knock, Lyon, Milan Malpensa, Nantes, Stuttgart.

Cardiff and Exeter have lost a combined 14 routes.  Cardiff mainly lost low-frequency city-break destinations, such as Munich, Rome, and Venice, along with the more obvious CDG and Dublin.

Exeter lost the capitals of Ireland, France, and the Netherlands, together with mainly summer-sun routes.

In all, Cardiff and Exeter lost 37 and 35 weekly departures respectively. But like with Southampton, it is made worse by flybe being so dominant at the airports and having relatively few international departures in the first place.