Delta has 8,359 flights and 151 routes at Atlanta in early October 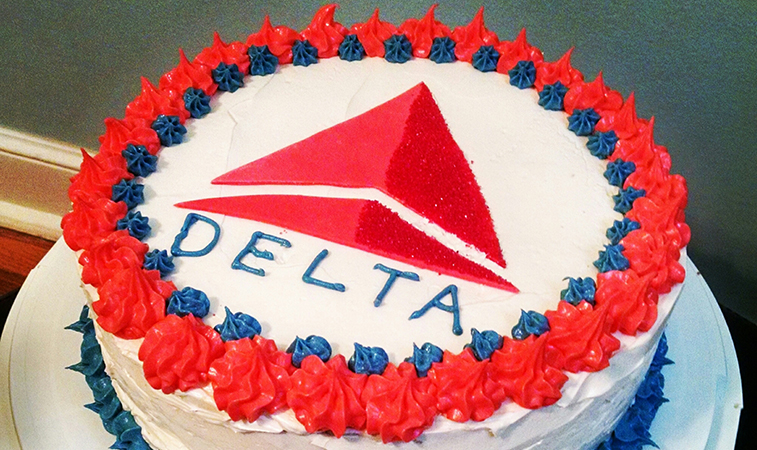 Across all airlines, Atlanta had 29.2 million two-way passengers between January and August 2020, airport statistics show.

This is down by 45.3 million YOY, a drop of 61%.  Importantly, this includes pre-coronavirus months when traffic – especially domestic – was greater YOY.

In August 2020, Delta’s Atlanta traffic was down by 70% domestically and 90% internationally.  But this was better than preceding months.

What this does not indicate, of course, is yields or load factors.  The latest Airlines for America report on the impact of coronavirus shows a US-wide load factor of around 50% in August, since up to around 56%. 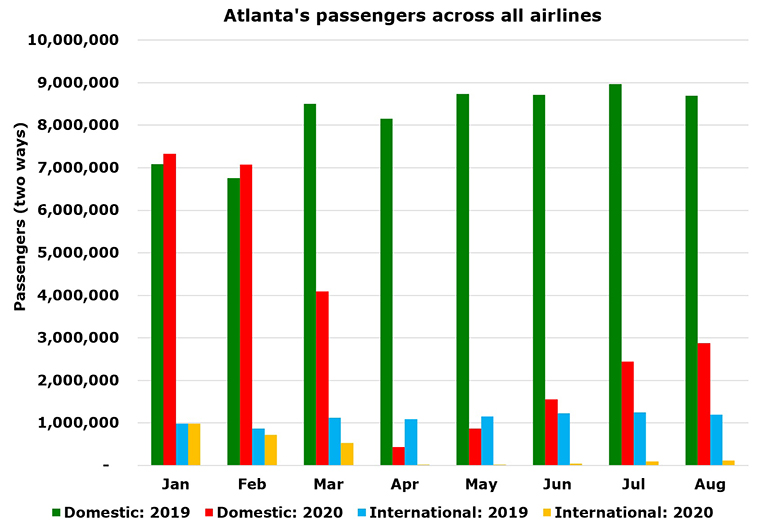 As Delta has such strong dominance at Atlanta, the above demand patterns reflect the airline’s too. Source: Atlanta Airport.

Delta will have 8,359 flights and 151 routes to/from Atlanta in early October

Delta will have 8,359 two-way flights to/from Atlanta in the week starting 5 October (down from 13,293 in the same period last year), OAG schedules data indicates.

This figure is roughly equivalent to almost 600 daily departures (down by ~350 departures a day).  The airline will have 80% of Atlanta’s flights, flat YOY.

New York state has fallen from second to seventh, with this one of the hardest-hit by coronavirus.

Despite the state’s fall, the city still leads Delta’s top city-pairs, with 132 departures from Atlanta (down from 232 YOY), followed by Washington with 79 (126).

This coming October week, Delta will serve 39 states from its Georgia hub, down from 44 in the year-ago period.  Hawaii, New Hampshire, Rhode Island, South Dakota, and Vermont are missing. 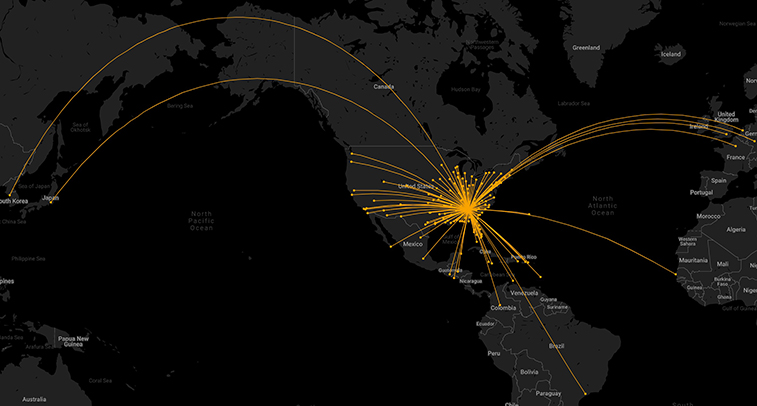 Cuts are obviously and understandably commonplace. American, for example, has removed 14 airports from its network.

In comparison to the same week in 2019, Delta has removed 58 airports from Atlanta, with some are shown in the map that follows. The top losses will be:

All of the above domestic destinations have other Delta operations nearby. For example, Moline for Peoria (72 kilometres) and Norfolk for Newport News (39 kilometres).

It is ‘retreat to core’ to help cut costs while increasing load factors from nearby airports.

Despite the cuts, Delta will introduce two routes from 20 November: Boise (ID) and Spokane (WA). 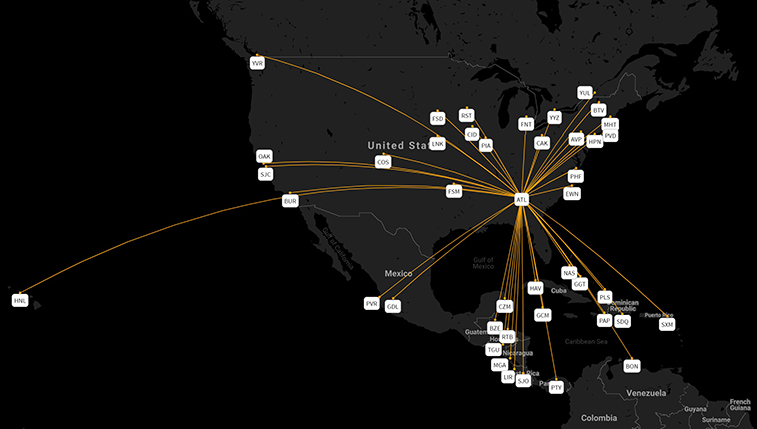 Delta’s cut airports (domestic, Canada, Mexico, Central America, and the Caribbean only) in the week starting 5 October 2020 versus the same period in 2019. Source: OAG Mapper.

Chattanooga will have more Atlanta flights than Boston and La Guardia

Delta will have 27 routes from Atlanta each with 45+ departures in the week starting 5 October 2020.

Fellow Delta hubs Detroit, Salt Lake City, and Minneapolis take the top-three spots – but they don’t normally.   This is again retreat to core.

Interestingly, Chattanooga (TN) will have more flights than Boston and La Guardia, while Columbia (SC) will see more than Miami.  Charleston (SC) will have almost as many Orlando. Of course, the picture would be very different by seats.

Allentown (PA), Appleton (WI), and Green Bay (WI), meanwhile, will be Delta’s least-served domestically from Atlanta, with five-weekly departures each.

Internationally, Cancun and Mexico City will be the most-served, with 33 and 28 departures respectively.  Long-haul, Amsterdam is top, with 14.  Rio is expected to restart in December; we recently explored its connectivity over Atlanta.

Showing the importance of leisure markets, Delta will increase Cancun by one-fifth YOY. This contrasts with Florida, despite growth there from other US airports.

Like Palm Springs (CA), which will introduce many new routes this winter, Cancun has been a big recipient of new routes and more flights. 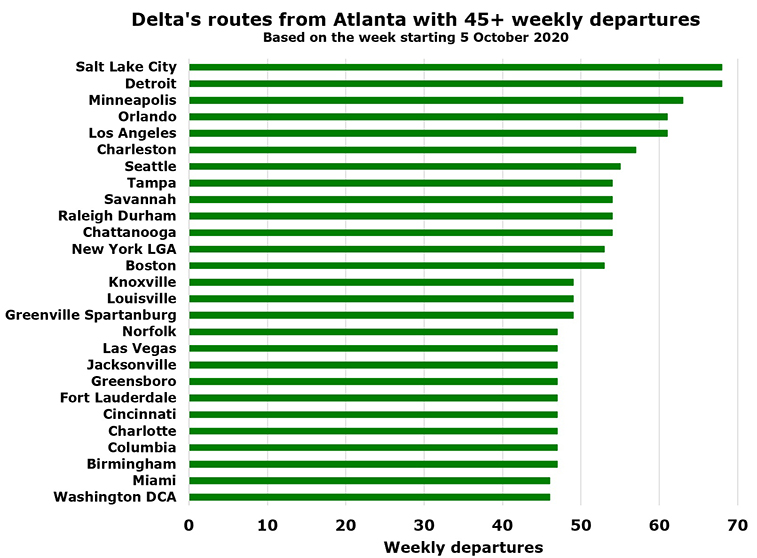