Could any of these 39 routes appeal to start-up Breeze, which is expected to start in March 2021?

There has been a rise in new, thin leisure-focused routes during coronavirus, which is likely to continue.

To qualify, there must have been at least 10,000 passengers in 2019 (whether both airports combined or just Fort Lauderdale) and be within 1,500 miles.

Those that were served last year or this year but which have been cut are also included. 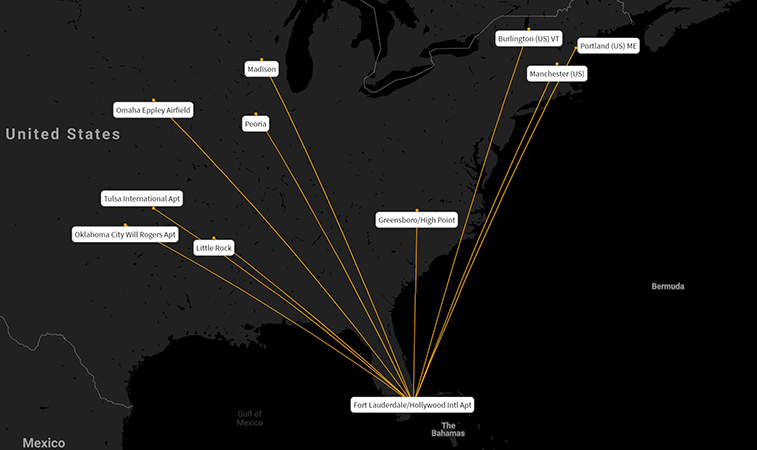 The top-10 unserved routes by 2019 passenger volume. Note: Peoria is used here as a proxy for the combined Bloomington/Peoria. Source: OAG Mapper.

We showed how intentionally clear as mud Breeze has been over possible airports and routes, which is of course very sensible.

But some of these 39 routes from Fort Lauderdale may appeal to the start-up too.

Since the above article was written, the carrier has said – whether misleadingly or not – that:

A stimulation factor has been applied to the following 2019 passenger volume based on those used by SEO Economics.

As Breeze will be a hybrid carrier, each stimulation factor has been averaged from that for LCCs and FSCs.

It is estimated that weekly frequencies would vary between two and three based on 140 seats (more or less what Breeze’s A220-300s may have), with an average weekly frequency of three.

American Airlines has increasingly focused on low-frequency new routes from its fourth-largest hub.

However, these are all unserved from Fort Lauderdale, which typically has greater demand than Miami.

A special mention to Rochester

A special mention must go to Rochester (NY).

This airport had over 75,000 passengers to the two Florida airports last year, booking data shows.  But it is woefully underserved.

It has a once-weekly, Saturday-only service to Fort Lauderdale with Southwest and, from this November, it will have the same to Miami with American Airlines.