Istanbul Sabiha Gökçen had more passengers than Frankfurt in August 2020, at just over 1.8 million and 1.5 million respectively.

Of course, this is just temporary, and it results from Turkey’s border being relaxed, so driving demand.

Nonetheless, it is insightful to see how things have changed as a result of coronavirus.

Pegasus, meanwhile, added the Turkish city of Agri, 1,174 kilometres away, together with Medina and Karachi.  We investigate Karachi later in this article. 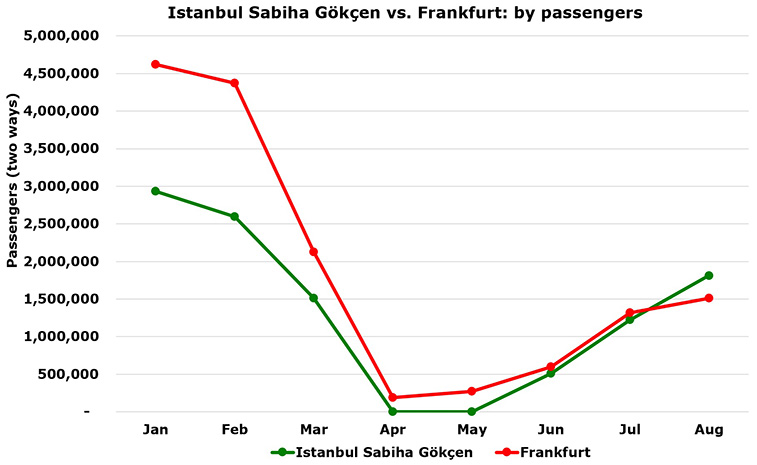 Istanbul Sabiha Gökçen: 1,591 departures in the week of 12 October

Istanbul Sabiha Gökçen will have 1,591 departures in the week starting 12 October, OAG schedules data shows.  This is down from 2,240 in the same week in 2019.

Pegasus and AnadoluJet will together have 96% of departures.

Sabiha Gökçen’s domestic network will comprise 33 destinations (down from 37), with Antalya, Izmir, Trabzon, Ankara, and Bodrum the top-five. It is the airport’s domestic market that is helping its total rebound.

Germany is still top, with one-fifth of departures, with nine airports in the country served.

Combined, there will be 95 weekly departures to Germany, with Düsseldorf, Cologne, Frankfurt, and Stuttgart each having 14+.

There is a new order in international routes, however, as Doha will now be number-one, up from fifth in 2019.  Last year, Ercan (North Cyprus), Amsterdam, Tel Aviv, Baghdad, and Doha were the top-five.

Kuwait, the fourth-largest destination this year, will be served by four airlines: AnadoluJet, Jazeera, Kuwait Airways, and Pegasus. 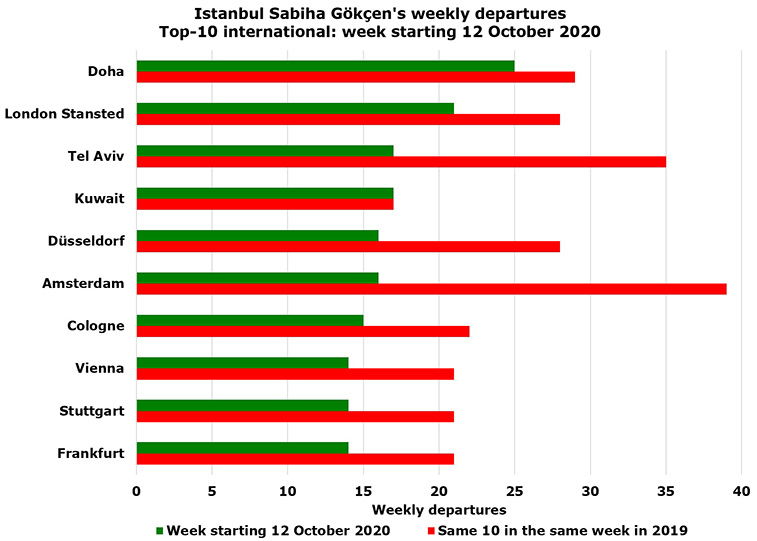 The route is down from 29 YOY, the result of Pegasus’ frequency halving.

Pegasus achieved an estimated SLF of 87% to/from Doha.  Nearly half of its Qatar passengers connected over Sabiha Gökçen. 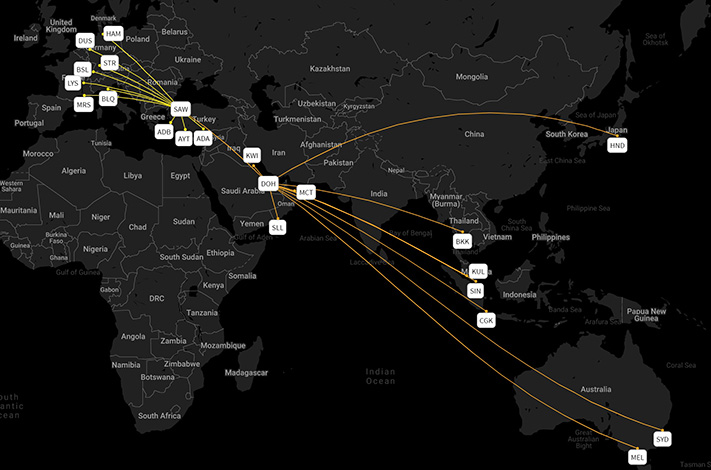 Sabiha Gökçen – Doha is now the Istanbul airport’s top international route.  Here are the top-10 segments for both Qatar Airways (in orange) and Pegasus (yellow).

Pegasus began Karachi on 25 September, with the 3,919-kilometre service postponed from 1 June.

We spoke with Gerald Ong, Sabiha Gökçen’s Aviation Marketing Director, about this development.

“Pakistan is Pegasus’ first foray into the Asian continent, further expanding its network at Sabiha Gökçen.

“Karachi is an important addition as it will provide the connectivity for Pegasus’ network expansion within the UK and continental European markets.

“Starting with an initial four-weekly frequency, the route has the potential to increase to once-daily.

“In addition, the growth of this route will allow for expansion into the other cities in Pakistan, especially Lahore and Islamabad.”

Not surprisingly, Ong expects Stansted and Manchester to be core for sixth freedom traffic due to the significant ethnic travel.

Asked about what new routes may materialise, Ong said that the UK remains underserved.  He highlighted that Birmingham and Edinburgh stand out for future service.