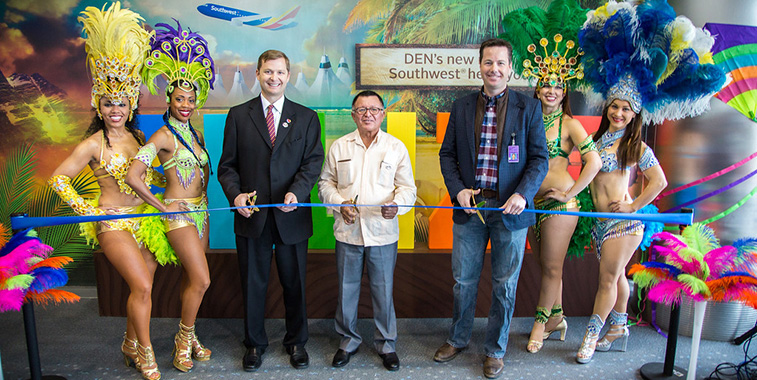 Miami and Palm Springs were already known, but Montrose was not.  Nor were the routes.

They join multiple other routes announced recently, including 11 in June.

Its new Palm Springs services will further boost the airport’s W20, with its November 2020 flights up by 17% before Southwest’s arrival.

Southwest’s nine new routes will have 137 weekly departures when they begin, with five routes having direct competition.

It is noteworthy how bullish Southwest is being, with brand-new Miami to Baltimore and Houston Hobby starting with 26- and 25-weekly services each.

Southwest will also have 37 weekly services from Fort Lauderdale to Baltimore and 21 to Hobby, its website indicates.

It is about cash generation in more buoyant leisure markets. Southwest’s revenue in October is likely to be down by 65-75% YOY, with load factors in the 45-55% range.

These three new airports build on Hilo added in January 2020, Cozumel in March, and Steamboat Springs coming on 19 December.

This is based on the week starting 12 October 2020 and it is in comparison to the year-ago week.

Airlines for America’s latest report, from 8 October, shows that Colorado’s percentage change in passenger flights is far better than the national average.

Chicago Midway is now second (down from first), followed by Baltimore (up by one place), Las Vegas (down one), and Dallas Love (unchanged).

Atlanta and Orlando join the top-10, temporarily pushing Oakland and Los Angeles out.

In this mid-October week, Southwest’s top-10 airports have a collective 8,133 departures, down by almost one-third from 11,901.

Southwest will have 1,196 departures from Denver, reduced by 400 YOY, equivalent to 57 fewer daily departures.

These will be joined later this year by five others: Little Rock (4 November), Charlotte (17 December), Steamboat Springs (19 December) – and now Montrose and Palm Springs. 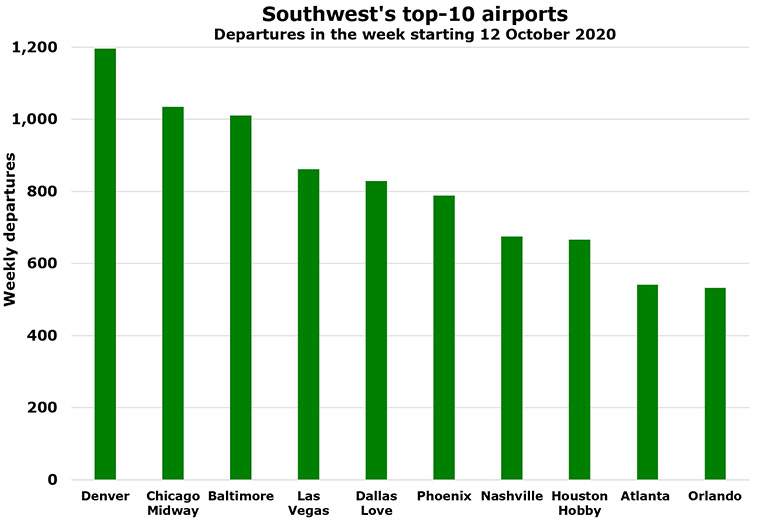 Southwest has 57 routes from Denver

Southwest will have 57 routes in this October week, down from 62 YOY.

Eight routes have been removed in this YOY comparison, offset by the three additions mentioned above.

Newark has of course permanently ended following Southwest’s focus on La Guardia.  Aside from this, those temporarily removed are Hartford, Cincinnati, El Paso, Jacksonville, Lubbock, Charleston, and Puerto Vallarta.

California rules, with 18% of Southwest’s Denver services, down from one-fifth YOY.  It has almost twice as many departures as Texas, with 10 California airports served.

Southwest has a minimum of seven departures on all 57 routes. Nine routes have this minimum, including Boston, Detroit, La Guardia, and Washington Dulles.

A4A shows that the state of New York is the second-worst afflicted by the percentage change in flights, with Southwest’s La Guardia – Denver down by 63% YOY.

Hobby and Nashville are both up by one departure a week, while Phoenix is down by just one.

Others, however, have been hit hard, such as Los Angeles and Kansas City, down as they are by 26 and 25 weekly respectively.  This pushed Kansas City from Southwest’s sixth-largest route from Denver in 2019 to joint-13th. 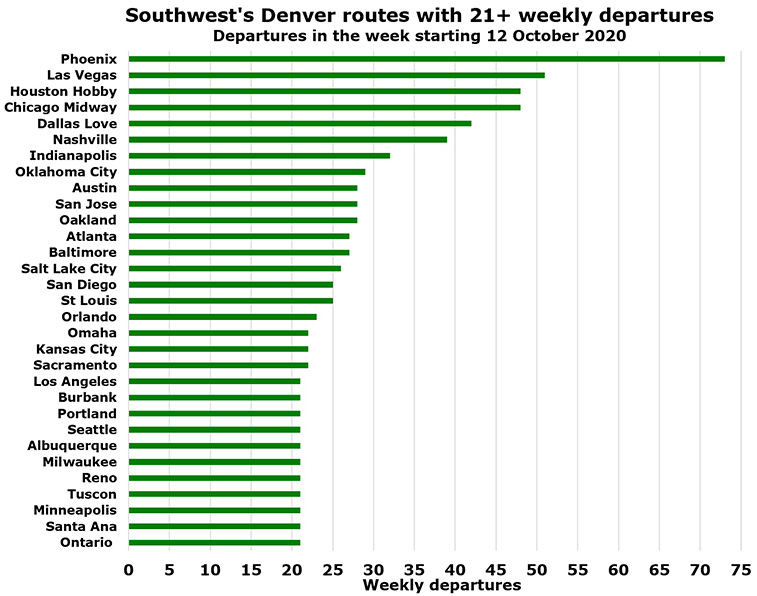 Southwest to start 10 routes from O’Hare and Colorado Springs

Southwest to start 10 routes from O’Hare and Colorado Springs 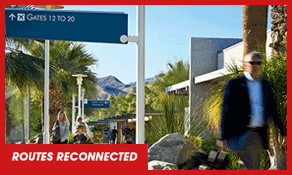 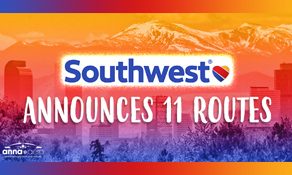