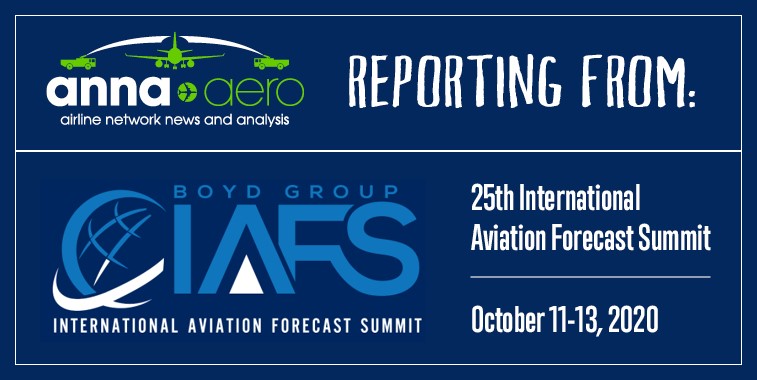 The International Aviation Forecast Summit is in its 25th year, and we’re reporting on the event – held in Cincinnati – virtually from the UK. 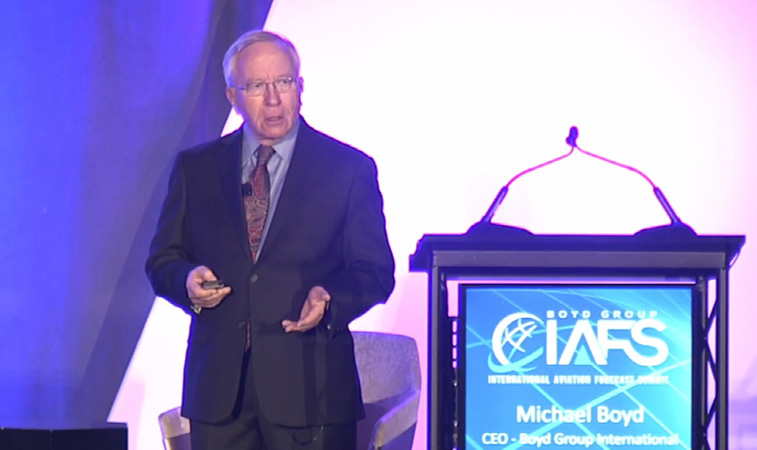 Michael Boyd, CEO of Boyd Group International, opened the event with “We’ve been nuked. The entire industry has been nuked.” Yet everything is ready. Fleets are intact (if grounded). Airline staffing is (hopefully) ready. Facilities are ready. The economy is coming back. Airline management has never been stronger. But – where are the consumers? They are confused, freighted, misinformed. It is now expected that 2019 traffic levels won’t be seen again until 2026, Boyd added. As such, he says everyone must hit the reset button. We must look ahead. We must be better at anticipating – you might be wrong with it, but if you anticipate you are being active and can change things. Yet forecasting – especially for the next 18 months – is like using an ouija board. 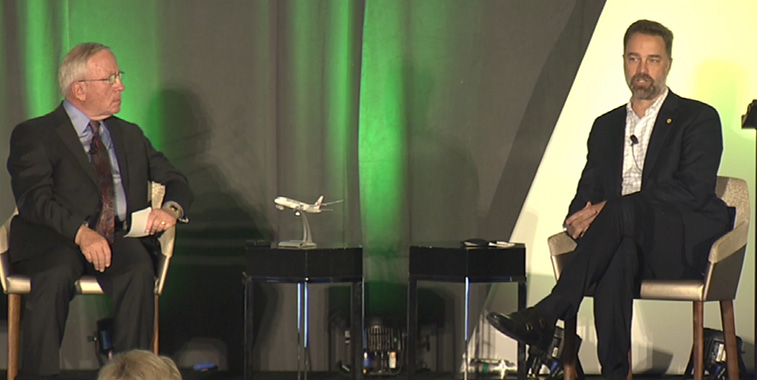 Ted Christie, Spirit’s President and CEO, said the carrier now serves 23 of the US’ 25 top metros – it is to these that people want to travel for leisure. The carrier is now seeing more people who would not travel by air – or rarely – doing just that, aided by low fares. But it isn’t just stimulating demand. It is seeing good pent-up demand, especially among Latin Americans – serves a lot of VFR markets, which has rebounded and will continue. It must focus more than ever on being smart, nimble, quick. Expects a reasonably good Thanksgiving on the back of better-than-expected Labour Day and post-Labour Day traffic. Expects to continue good growth – maybe 16 aircraft delivered in 2021, down from 24. Sees no A321LRs/XLRs for long-haul service. On the outside, Christie says Spirit is seen as a colourful business, but it is a very conservative airline. 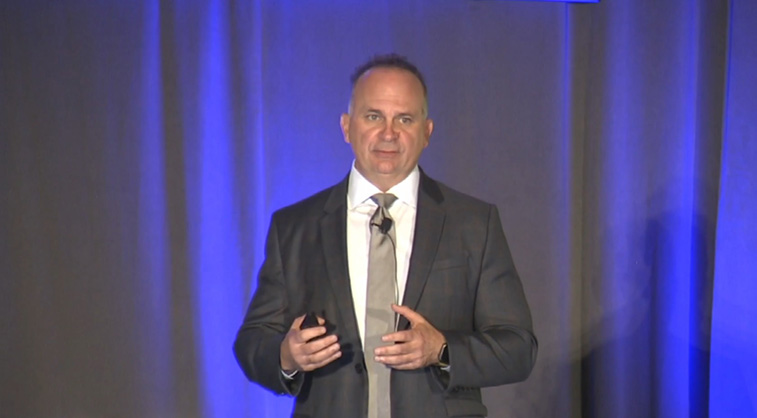 Delta’s SVP of network planning, Joe Esposito, is clear: “There is still plenty of pent-up travel.” Domestic is coming back much faster than international, with the West recovering far faster than the East (except Florida!). Delta expects its Salt Lake City hub to have 90-95% of its flights by November. But, all of its normal way of planning and forecasting is out of the window. It has gone back to basics. It’s now all about real-time planning. Where do people want to go – next week? It is putting schedules out one month in advance – and still adjusting in that period. Still, people are becoming slightly more confident, he says – so are booking a little bit further out. Delta is now talking to its corporate clients more than ever, which isn’t surprising when corporate traffic is down by 90%. It says to them: “When do you want to fly and where? We’ll put routes back when you want to fly.” When they expect to get back on the road varies completely by industry. Fundamentally, “if we can’t make customers feel confident on a plane, we have nothing.” 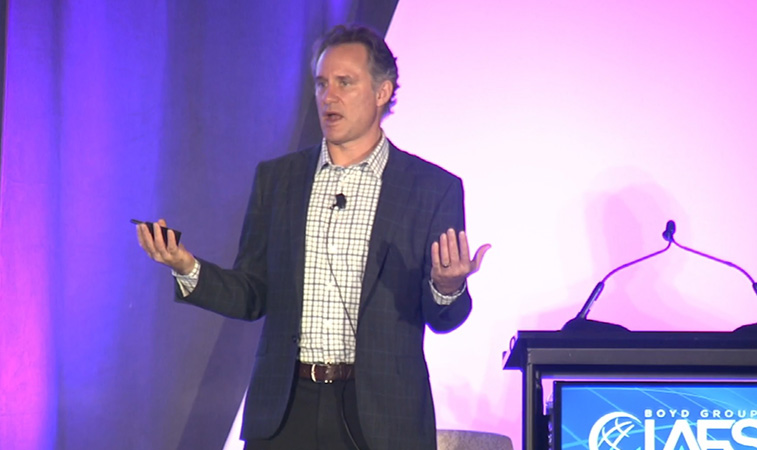 Jude Bricker, Sun Country’s President & CEO, said “Our close-in fares are now stronger than they were last year” – from capacity discipline across carriers. The carrier will take on more aircraft and staff from next month, Bricker said. Sun Country is “the Allegiant model but with bigger cities.” The carrier had two core advantages going into crisis: “we’re very small as an airline goes, and this has meant we could redeploy planes much quicker.” This responsiveness is now Sun Country’s “superpower”, Bricker said. Sun Country now has really dynamic capacity allocation – schedules much, much more responsive to real-time demand. Its schedule is now super dynamic and it continues to be so even for next week. Its core market – taking Minnesotans south during the winter – will recover strongly, while cargo is doing “really, really” well and charter is growing, especially ad-hoc from sports teams.

United Airlines’ Ankit Gupta, VP Network Planning and Scheduling, and Patrick Quayle, VP International Network and Alliances, said that small community traffic is growing, leisure is growing, and skiing is coming back nicely and earlier than usual. Small communities are craving service and feed, they said, whether to access the likes of Jackson Hole (WY) or Florida. Pre-coronavirus, United was increasingly focusing on dual cabins even in small markets. It expects its 50-seat CRJ-550s with two cabins to become a real workhorse. United’s load factors are rising – all about passenger sentiment about the destination they are going to rather than about flying, they believe. Despite coronavirus, United has added multiple routes and cities, with Accra, Bangalore, Johannesburg, and Lagos all coming, along with the likes of Abilene (TX) to Houston and Key West to Washington Dulles. These join others that have started, including Rochester (MN) to Denver and Chattanooga (TN) to Houston. United is most keenly awaiting the EU opening up. 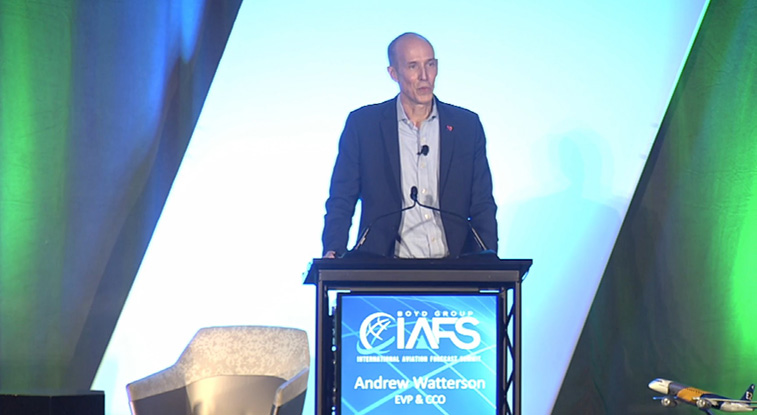 Andrew Watterson, Southwest’s EVP and CCO, announced that Chicago O’Hare and Houston Intercontinental are coming in the first half of 2021. Routes will be announced in the next couple of weeks. They’ll join the carrier’s core airports at Midway and Houston. The reason is that they have lots of passengers from locations closer O’Hare and Intercontinental, and they now have the aircraft to properly do it. It’s quite common for Southwest to serve two airports nearby, e.g. Oakland and San Francisco, Baltimore and Washington National, and coming Miami and Fort Lauderdale.