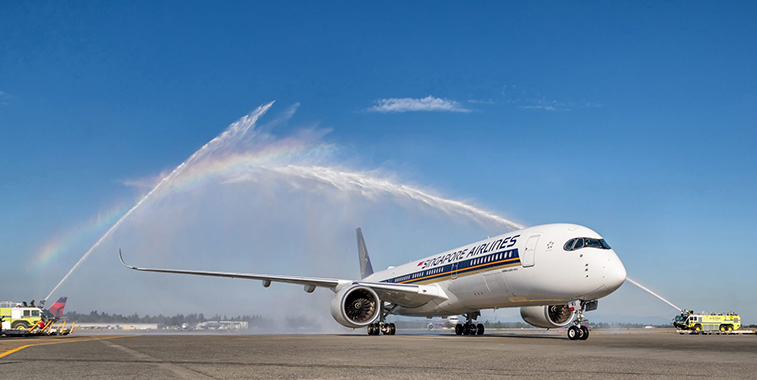 Come December, Melbourne will be Singapore Airlines’ top destination by weekly departures. All will be operated by 303-seat A350-900s.

Singapore Airlines has always been a major operator between its home country and Australia.

It serves five Australian cities: Adelaide, Brisbane, Melbourne, Sydney, and Perth.  This rises to eight when SilkAir is included with its Broome, Cairns, and Darwin services.

Singapore Airlines carried 3.4 million passengers between the two countries in the year to June 2019, Australian government data shows, along with 180,000 tonnes of freight and mail (belly and all-freighters).

Around three-quarters of these 3.4 million transited over Singapore, booking data reveals.

It is not surprising that Australia featured 10 times in the full-service carrier’s top-20 connecting country-pairs.

If Singapore Airlines and Qantas are combined, Melbourne – Singapore was Australia’s top international route in this pre-coronavirus year – with 1.6 million.  In this year it pushed Sydney – Auckland off the top spot.

Fast-forwarding to now, Singapore Airlines’ network-wide total weekly departures are – fully understandably – temporarily a shadow of what they were.

It currently has 93 departures – equivalent to 13 each day – across 30 routes. 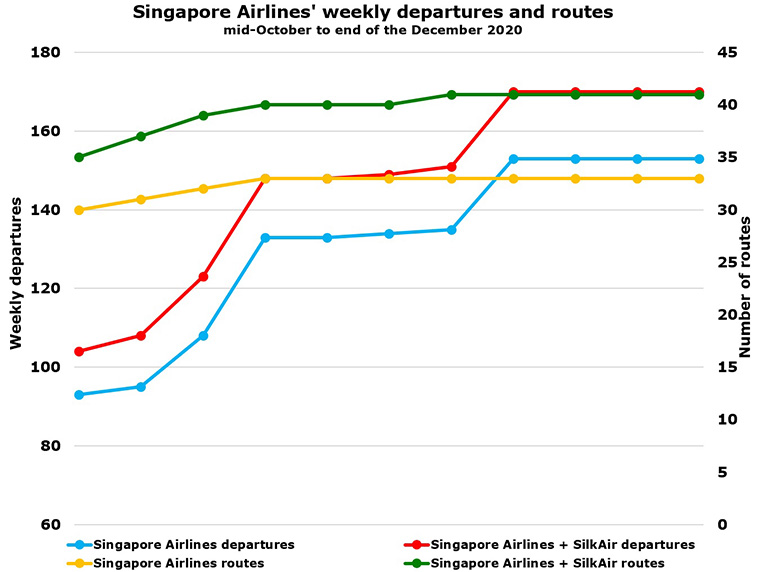 Come December, these 93 weekly departures are currently scheduled to rise to 153 – down from 923 in the year-ago week.

Melbourne will have 13 departures – 8% of Singapore Airlines’ total – greater than to London Heathrow and Sydney with 12 apiece.

23 routes will have three or more weekly departures in mid-December, with a combined 139 departures (523).

Australia will have 36 departures or almost one-quarter of the carrier’s total. 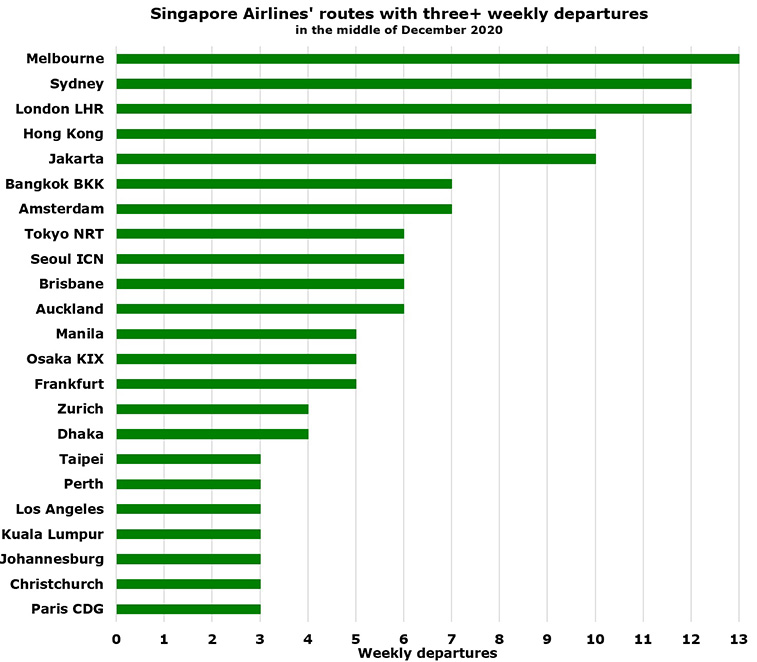 In mid-December, Singapore Airlines will have 23 routes with three or more weekly departures. Melbourne is top. Source: the carrier’s website and OAG Schedules Analyser.

Speaking to anna.aero, the airport said that “Singapore Airlines are an important airline partner at Melbourne Airport. They have provided and continue to provide important connections to Asia during COVID-19 to bring Australians home.

“We welcome their future plans and commitment to the Melbourne market and for their support.

“Our strong partnership has laid a solid foundation to working together through this global pandemic and sets us in good stead for when borders open up.”

Freight is, and will always be, important to Singapore Airlines.

From Melbourne, it typically carries Victorian produce, especially seafood, pork, and beef, together with automotive parts and aircraft engines, amongst other things.

Via Singapore; what are the top O&Ds?

Not surprisingly from the above, India was by far Singapore Airlines’ top country from Melbourne, with twice as many passengers as number-two, the UK.

China, Indonesia, and Thailand completed the top-five.  These five had over half of the airline’s transit traffic.

South Asia was the top sub-region from Melbourne, with eight cities there in the carrier’s top-20 O&Ds: the five above together with Bangalore, Male, and Hyderabad.

Melbourne is Delhi’s 15th largest international route and the only Australian city in its top-20. 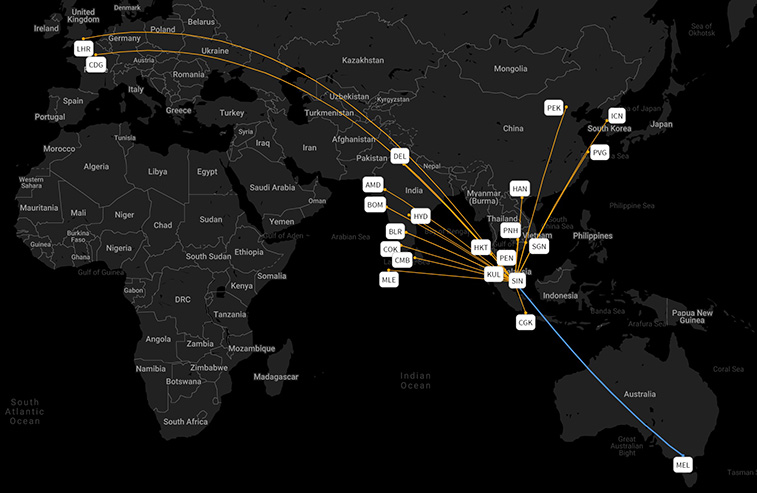