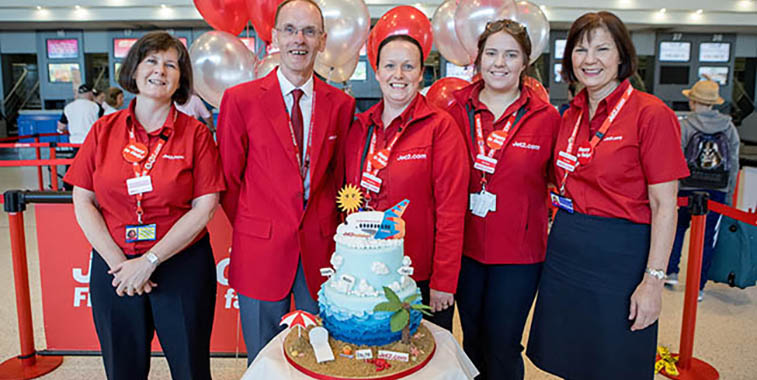 Jet2 will now have six routes to Jersey in S21 with a combined 11 weekly flights.

All are new for the carrier except Manchester, which it served for four months back in 2014; it is this that accounts for the Northwest airport’s spike in the figure below.

These five routes will complement Jet2’s long-standing Leeds Bradford – Jersey.  In 2019, it carried 12,077 on this, UK CAA data reveals – its lowest in a decade.

Jet2 had a 73% seat load factor to/from Leeds Bradford, well under its system-wide average of 90.9%.

Birmingham was expected to become Jet2’s second-largest airport this year, after Manchester.

In all, Jet2 will have eight weekly frequencies across these coming routes. When added to direct competition, they’ll have 28 weekly – down from 34 in 2019.

Of these five routes, only Stansted wasn’t served last year; it was last operated by Aurigny in 2014.

Birmingham and East Midlands were last operated by flybe in 2019; Blue Islands has since taken over them.

flybe was the sole operator from Manchester between 2015 and 2018, until easyJet joined it in July 2019; it supplements the LCC’s well-established Liverpool.

Newcastle, meanwhile, was operated by flybe until 2013, with easyJet then beginning it.

easyJet ceased Newcastle – Jersey in 2020 as a result of closing its Northeast England base (along with Stansted and Southend).

We looked at these three easyJet bases in July, and then at easyJet’s most profitable airports. 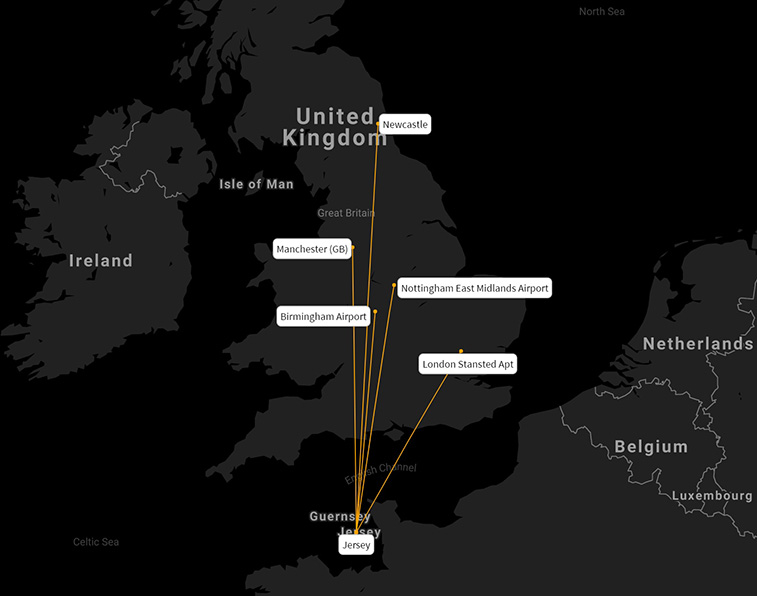 Nonetheless, this 2019 volume was the third-highest since 2010 – despite no Stansted.  This performance was for one reason: easyJet starting Manchester, which grew airport-pair traffic by one-third YOY.

However, SLF on Manchester – Jersey (with both flybe and easyJet combined) was just 72% last year, the lowest of the four routes.

While SLF is just one element of performance and reflects airline business model, pricing, and much more, Newcastle was 83%, Birmingham 80%, and East Midlands 73%.  This is based on UK CAA passenger traffic related to OAG seat data.

Manchester and East Midlands were significantly larger in size earlier in the decade due to bmibaby – remember them? 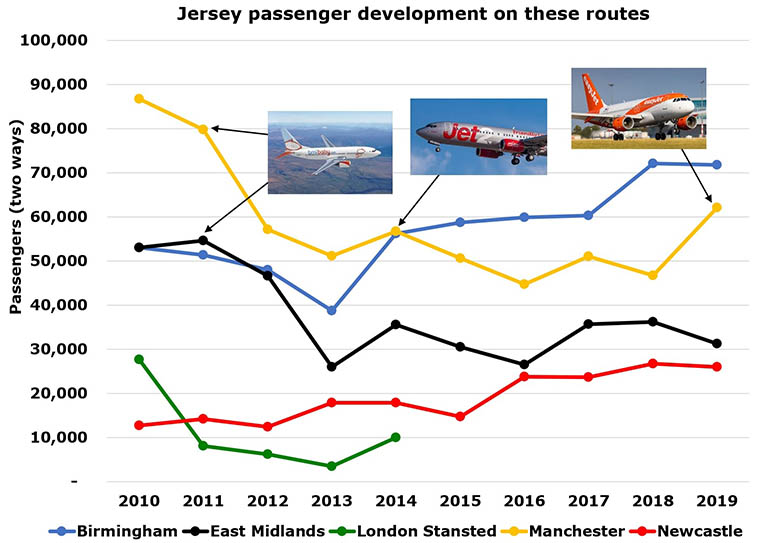