Khalil Lamrabet, second left, helps to cut the cake for Go Air’s launch from Abu Dhabi to Mumbai in July 2019.

We speak with Khalil Lamrabet, Senior Vice President of Aviation Development at Abu Dhabi Airports, with a particular focus on the airport’s two new home-based LCCs.

What is the latest on Abu Dhabi’s new terminal?

Khalil Lamrabet: We remain committed to delivering the midfield terminal in the very near future. It’s a prestigious project for Abu Dhabi and a 21st Century gateway to the world, which will set the benchmark for airports for decades to come.

However, our number-one priority at this moment is ensuring the health, safety, and wellbeing of our employees, passengers, and the Abu Dhabi community. We continue to support the resumption of air travel and transport in the midst of the global coronavirus pandemic. 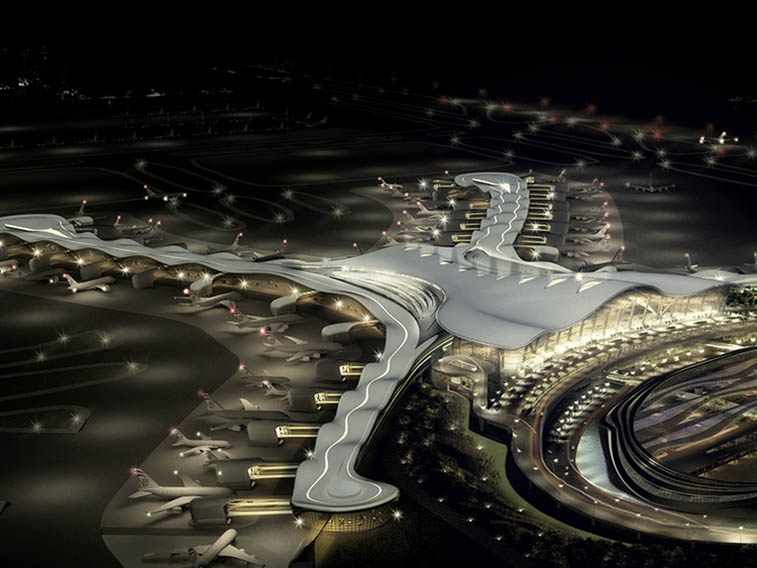 The airport’s coming midfield terminal, which Lamrabet says will open in the “very near future”.

You welcomed Air Arabia in July this year. The airline now has seven routes operating or announced.

How big do you expect Air Arabia to become at Abu Dhabi?

Lamrabet: The LCC market has historically been underserved here, with about 5% LCC penetration in terms of scheduled seats in 2019. The market has significant potential for growth.

This potential is further supported by our focus on attracting more visitors to Abu Dhabi in support of the long-term vision of the emirate. We are working collaboratively to provide balanced choices between full-service and no-frill products for those traveling from or to Abu Dhabi.

However, it is difficult to speculate on the potential size of one carrier at Abu Dhabi, as it will depend on a range of factors along with global market dynamics and the speed of recovery post-coronavirus.

Do you expect mainly brand-new routes or for the LCC to start offering a lower-price alternative on existing routes?

This would presume a focus on new routes or a takeover of lower-yielding routes in Etihad’s existing network.

I expect Air Arabia and Etihad Airways to cooperate closely, particularly in the form of code sharing and network expansion.

In August, anna.aero looked in detail at possible future routes for Air Arabia from the UAE capital. 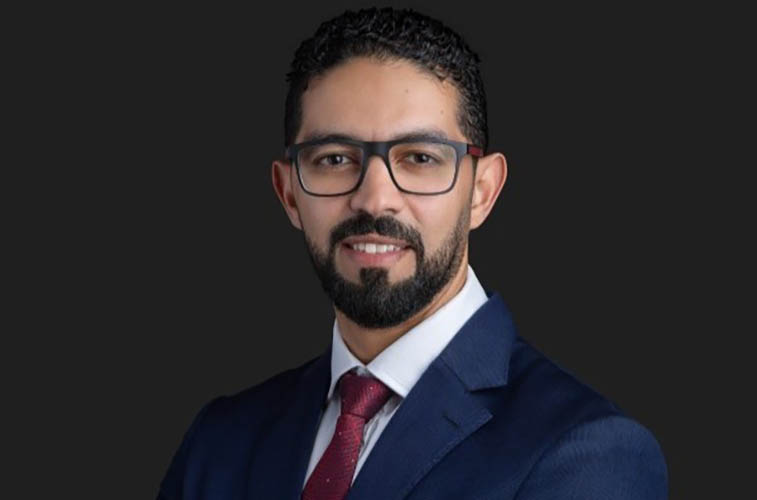 We chat with Khalil Lamrabet, SVP of Aviation Development at Abu Dhabi Airports. He does not expect Wizz Air to adapt its model for the local market and he sees mainly new routes for Air Arabia.

Wizz Air will take off from Abu Dhabi in November with an initial 11 routes. The ULCC has said that it is looking at routes across the Middle East, Africa, and South/Southeast/Central Asia.

Will the carrier be point-to-point only – as it currently is of course – which makes sense, or do you expect the AOC to adapt to offer connections?

Lamrabet: I do not expect Wizz Air to deviate from its core business model for the Abu Dhabi market. This remains its winning formula to maximise operational efficiency and to minimise CASK. I would therefore expect them to continue focusing on the P2P market only.

How many routes do you expect Wizz Air Abu Dhabi to have?

Lamrabet: We have identified over 40 potential routes that could be served by Wizz Air Abu Dhabi within the first four years.

These were obviously determined based on pre-coronavirus market conditions, but we believe that the market post-cor9onavirus will continue to be favourable to point-to-point traffic.  It’ll offer opportunities for expansion to both Wizz Air and Air Arabia.

Both have ambitious plans to leverage this potential to stimulate both inbound and outbound traffic.

Will Wizz Air Abu Dhabi use Abu Dhabi as a base for the whole UAE and promote AUH as a way of reaching Dubai too?

Lamrabet: Given the close proximity of the UAE’s largest airports, both LCCs will appeal to travellers interested in visiting Abu Dhabi as well as other emirates. Abu Dhabi International Airport already welcomes departing passengers originating from across the country. 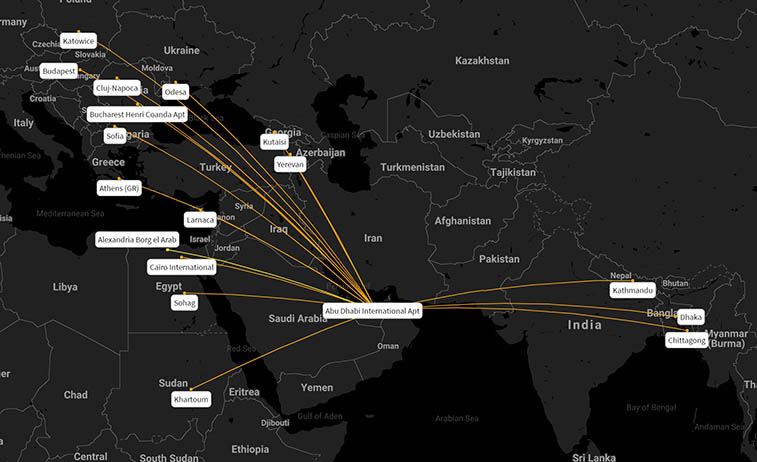 Air Arabia and Wizz Air’s initial routes (both in service and coming) from Abu Dhabi. Only one route of these will be operated by both: Alexandria. Source: OAG Mapper.

Has the arrival of these LCCs been a godsend given Etihad’s cutbacks, with its Abu Dhabi seat capacity last year about the same as in 2015?

Lamrabet: Wizz Air and Air Arabia will certainly boost and stimulate traffic.  Of course, their products are largely targeting a new traffic segment that was until now mostly untapped.

Together with Etihad’s network optimisation, our network is expected to become more balanced, offering ample choices to passengers and establishing a solid base for sustained growth.

Thinking into the future, what are your top-five unserved routes?

Lamrabet: Based on pre-coronavirus market demand and traffic flows, our top unserved routes in 2019 were as follows, with four in India: 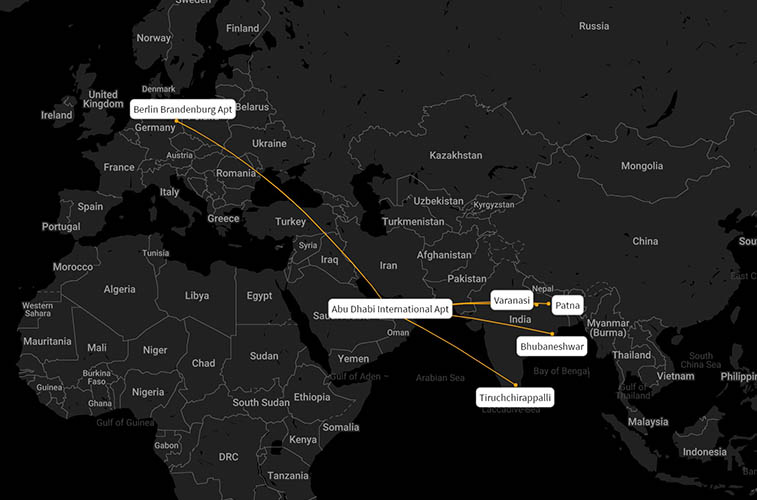 The airport’s top unserved routes, Lamrabet says. Despite this, he expects the two new LCCs to be focused on Eastern Europe, CIS, Russia, and Eastern Africa. Note: Berlin Brandenburg is used as a proxy for the city. Source: OAG Mapper.