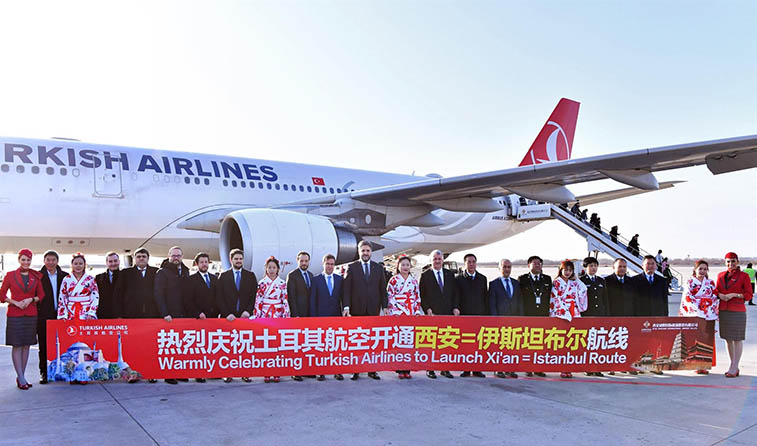 Turkish Airlines began Xian at the end of 2019. It began Tokyo Haneda in 2020, while widebody service is coming in 2021 to Berlin Brandenburg and Tunis. Newark, Osaka, and Vancouver start next year.

Turkish Airlines has 80 widebody destinations in the week starting 1 December 2020 – 70 are non-stop and the rest one-stop.

This look into the carrier’s widebody network comes as it received its first A350-900 on 22 October, almost exactly 16 months after its first B787-9 arrived.

It’ll initially deploy A350s from the start of summer 2021 to Dubai, London Heathrow, Buenos Aires (via Sao Paulo), and Manila, its website shows.

The operator has 15% fewer widebody destinations but 52% fewer weekly flights versus the year-ago December week.  It is still using them very broadly across its network – just not as often. 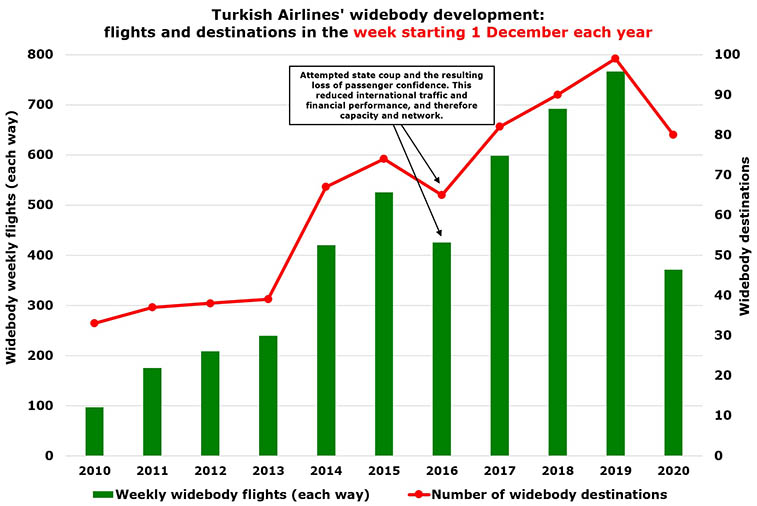 The development of Turkish Airlines’ widebody flights and destinations.

Ulaanbaatar received its first widebody service this year too, with A330-200s operating non-stop between January and March.  After the route’s suspension until August, it reverted to B737-900s via Bishkek – some 6,280 kilometres.

From 2021, it will also use widebodies to Berlin Brandenburg and once again to Tunis. 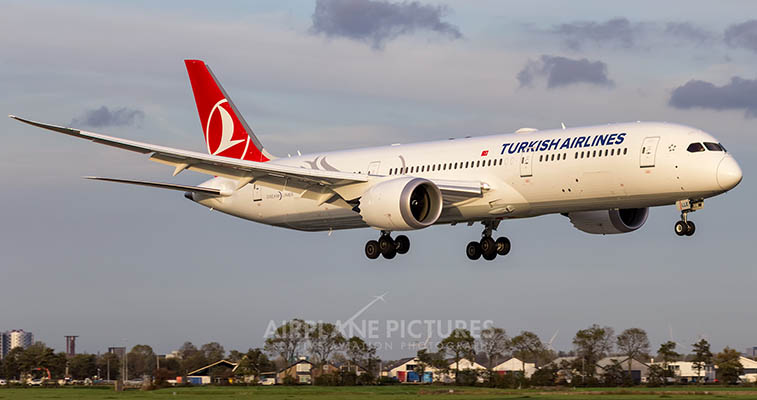 Turkish Airlines’ first B787-9 arrived in July 2019. In the first week of December 2020, the model will have 23% of the airline’s widebody flights. Kiev Boryspil is its top destination, followed by Jakarta and Chicago O’Hare.

Turkish Airlines widebodies on 1/3 of network this December

Turkish Airlines will use widebodies on just over one-third of its total network in this December 2020 week.

57 countries will receive its twin-aisle aircraft, down by just four YOY.  The USA, Turkey, Pakistan, China, and the UK will be the most-served.

In 2019, Turkey was by far its top widebody country, with 60% more weekly flights than second-placed USA.  Then, it had 107 weekly departures to seven airports.  Now it has 32 to three: Adana, Ankara, and Izmir.

The Middle East was the airline’s second-largest region for widebodies, but frequencies have almost halved.

Although it has 21 Middle East destinations (down by just three), the big drop in flights is mainly from Tel Aviv having 49 fewer weekly widebody services and no such aircraft being used to Medina. 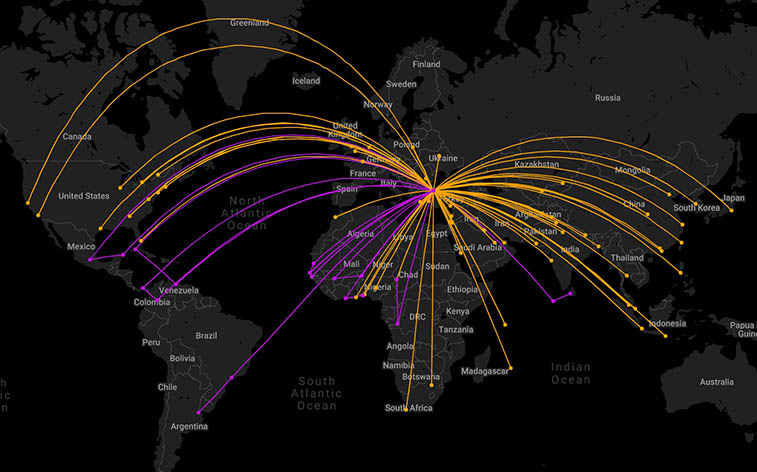 The widebody network of Turkish Airlines in the week starting 1 December 2020. Pink denotes one-stop services, with eight in ten of these operating triangularly. Source: OAG Mapper.

21 destinations have half of widebody flights

Of Turkish Airlines’ 80 widebody destinations, 21 have at least a seven-weekly service in this December 2020 period.

Turkish Airlines had 28 weekly services between Istanbul and Amsterdam last year – all by widebodies.  It is now one of the carrier’s hardest-hit destinations.

Of these 21, Tashkent is a widebody destination (it wasn’t last December), while Athens, Beirut, and Kiev all have more such flights YOY.

At just 357 kilometres, Izmir is its shortest widebody route, followed by Ankara (380) and Bucharest (423).

Istanbul – Mexico City – Cancun, meanwhile, is its longest at 12,666 kilometres.  It then continues non-stop from Cancun to Istanbul.

Eight of its ten one-stop services operate triangularly like this.  Istanbul – N’Djamena – Kinshasa – Istanbul stands out.

To travel from the Chad capital to Istanbul or beyond, passengers must first fly 1,827 kilometres south before virtually overflying N’Djamena on the way to Istanbul. 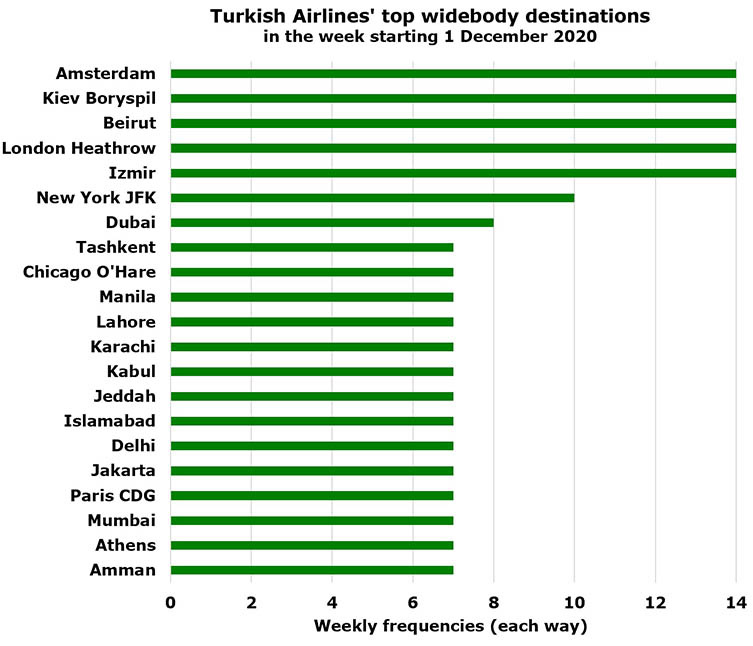 Turkish Airlines has 80 widebody destinations in early December 2020, with these each having at least a once-daily service. Source: OAG Schedules Analyser.