Loganair ‘won’t be another flybe’, MD tell us; Isle of Man to LHR coming? 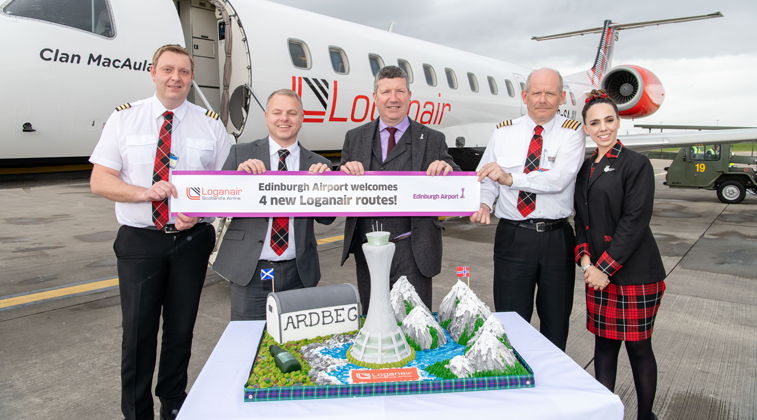 Scandinavia is an important part of Loganair’s network and will remain so, Loganair’s MD, Jonathan Hinkles, told us. In March 2019, the carrier began Edinburgh to both Bergen and Stavanger, 699 and 631 kilometres away respectively.

Loganair became an independent airline in 2017 after its long-standing franchise agreement with flybe ended.

Since its rebirth, ‘Scotland’s Airline’ has grown strongly.  It ended 2019 with 1.6 million seats – its highest – across 68 non-stop routes and six countries.

Loganair is now the UK’s third-largest domestic airline after easyJet and British Airways.  But with a network of 39 UK airports, it is by far the number-one by this measure.

anna.aero’s Chief Analyst, James Pearson, met up with Jonathan Hinkles, MD of Loganair, in October to discuss the airline’s development and future. 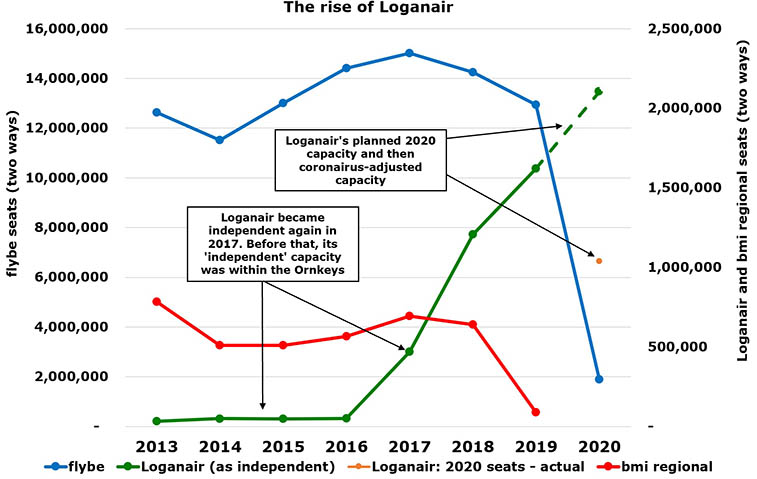 Loganair’s growth has been rapid since becoming fully independent from flybe in 2017. It had expected 2.1 million non-stop seats in 2020, up by 30% YOY. Understandably, that didn’t happen because of coronavirus.

“We took over around 14 flybe routes,” Hinkles said. “And they’re important. If we didn’t have these routes we would be heading in a different direction during this pandemic.”

Hinkles categorised flybe’s route network into three.  “Firstly, routes picked up by others; secondly, routes possibly viable that no one is serving; and thirdly, routes that no one should have been operating in the first place.”

Multiple routes remain in the second category, both domestically and internationally.  “Perhaps 10-15 routes,” Hinkes suggested, “especially involving Dublin, Paris CDG, and Amsterdam. We think a good number of these did well.”

We recently showed that 11 of flybe’s 15 most profitable international routes remain unserved. The above cities featured.

The largest of these, Edinburgh to Manchester, won’t be straightforward. “This route needs real hub service,” Hinkles said, with connectivity over the English airport.  Loganair shelved its plans to begin up to a four-daily service.

Loganair replaced flybe between the Isle of Man to Manchester in March this year, with this routing having 173,000 passengers in 2019. The Isle of Man is an increasingly important part of its network.

Loganair – no new base anywhere else

“Our core is still Scotland and Newcastle, plus the Isle of Man now,” Hinkles said.

“Our operations base in the Isle of Man is already set up.  We don’t want to create a new base anywhere else.”

London City seems to end in mid-November, according to the airline’s website.  This may be because a new Heathrow route is coming.  (The carrier did temporarily operate Isle of Man to Heathrow when London City was closed because of coronavirus.)

Isle of Man to Heathrow coming?

“We’ve operated to London City for sometime, but the Isle of Man Government has a long-standing ambition to be reconnected with Heathrow.”

“We had a good opportunity to get Heathrow slots, and we applied for them back in July.  They were approved at the beginning of October.  It’s easy to get slots, but they’re not grandfathered.

“We’re still working on the route. We’re in discussions with the island’s Government about it, but it must be part of a long-term plan.  Our objective must be about the longer-term.” 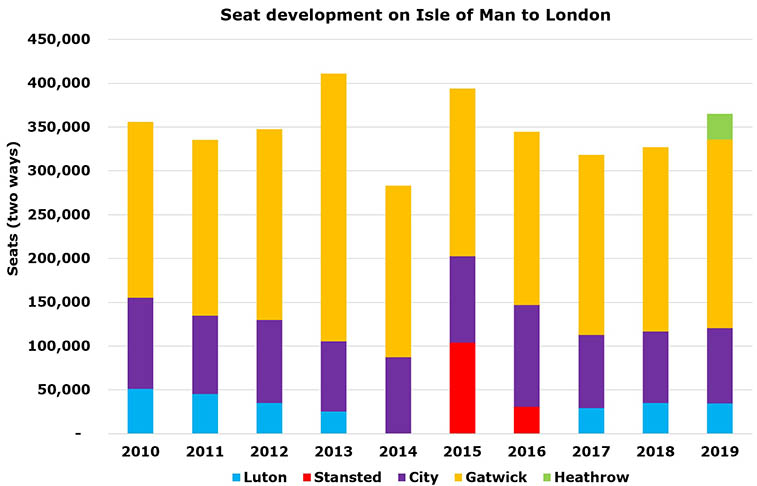 In 2019, Isle of Man – London had 365,000 seats across four airports and three airlines. easyJet was by far the top carrier with almost seven in ten seats with its service to Luton and Gatwick. Currently, Loganair is the only operator connecting the island to London with its City operation, which seems to end in mid-November, while easyJet returns in early 2021. Will Heathrow be served again? Source: OAG Schedules Analyser.

Germany is a “fundamentally damaged” market

Hinkles’ refreshingly clear attitude about sustainability is not just reserved for domestic markets.

“Over the last year or so, we’ve been into a number of markets. I think we’ve learned quite a lot about ourselves and what works and what won’t for us.

“As part of our network replanning, we’ve come out of a couple of northern European markets, particularly in Germany.

“It’s not just a question of whether our aircraft will work there, but you’ve got a tremendously high-cost and low-yield environment. And you’ve got a whole bunch of regulatory hassle.”

“As a market, Germany is fundamentally damaged.  In fact, the main operators there have had some eye-watering levels of support. I’m surprised that as many airlines in the market in Germany are sticking with it under those conditions.”

Read more: Germany was easyJet’s worst-performing country with an ~£84m loss in the past year.

“We’re finding Scandinavian markets [Norway and Denmark] have worked well for us.

“The yield environment is stronger and the sectors are shorter. You tend to find that the average fares to Norway are very similar to those of an average point in Germany, but we’re doing half an hour’s less flying each way to get there. It does really make a difference to the economics.

“Going forward, I see us concentrating on the UK, Scandinavia, and Ireland,” Hinkles said. 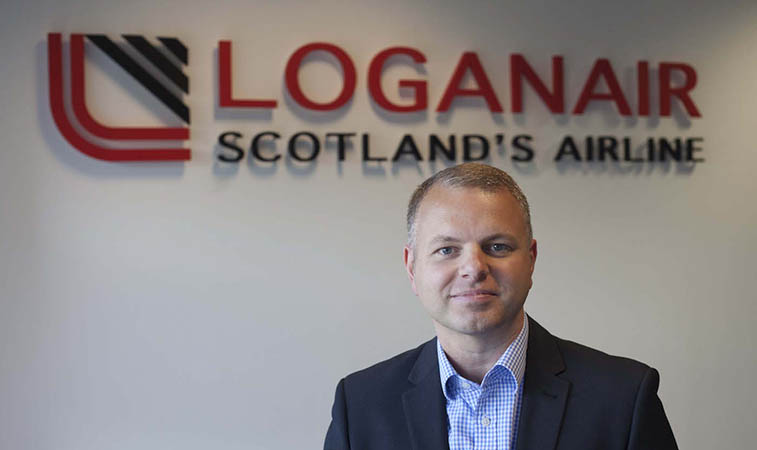 Jonathan Hinkles he told us that “everything is now a significant risk” and as such there “needs to be more of a partnership with airports.”

Loganair: “airports are largely being rational”

Asked what Loganair wants from airports, Hinkles was unequivocal: “There needs to be more of a partnership with airports.  We won’t sign up to long-term deals. There’s absolutely no way we can do that with the current market uncertainty.”

Given coronavirus, “everything is now a significant risk”. As such, understanding and proactivity from airports is required.

“Airports are generally being open. They’re largely being rational and reasonable.” Some have cut minimum passenger thresholds, for example.

Hinkles praised Newquay for acting very quickly in agreeing to terms for its new Manchester service that begins on 28 March 2021.

Loganair is talking to many airports about new route opportunities.  “There will be a number of potential thinner routes that full-service carriers end.  A good place to be in a recession is to have smaller planes… get the bottom that others cut.”

Loganair and Blue Islands began their new partnership in September.

“We’re like-minded carriers. We have a good relationship with them. Our partnership allows us to have what we couldn’t provide ourselves,” Hinkles said, citing the example of Glasgow, Edinburgh, or Newcastle over Southampton to the Channel Islands.

“In summer 2021, we’ll have 11 daily flights at Southampton.  We’ll have one entire aircraft there because of our Blue Islands partnership.”

The relationship benefits from spare aircraft capacity and the confidence arising from the two carriers working together.

“We have been providing them with support in common areas.  We have the same reservation system, for example.”

This assistance has necessarily led to many potential problems being eliminated.  “We ironed out the wrinkles of our relationship with a technical expert working with Blue Islands for two days a week.” 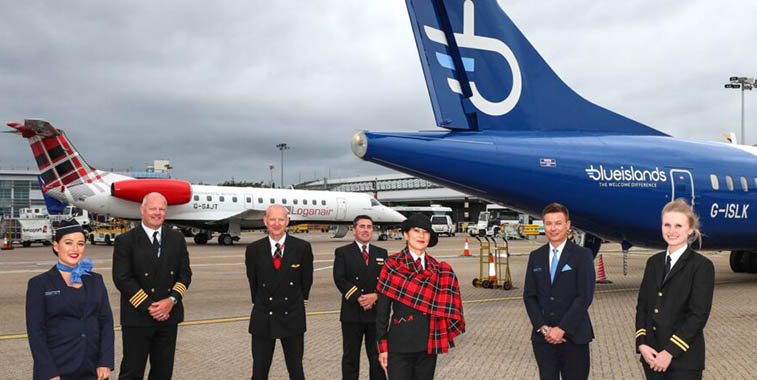 Loganair’s new partnership with Blue Islands allows the carrier to do things it couldn’t do on its own.

Loganair: “no ambition to have 60+ aircraft and looking like flybe”

“We have a big plan for summer 2021 that is reasonable and rational,” Hinkles said.  “We’re planning to have 41 aircraft by then, two fewer than expected at the beginning of coronavirus.”

This is down from the 43 to 50 aircraft the carrier thought it would have immediately before flybe’s end. Yet, “we have no ambition to get to 60+ aircraft and looking like flybe.”

“The ATRs are newer and more maintenance-efficient aircraft with a much lower trip cost than the Saabs.”  And seat economics are clearly in “a different world completely.”

Hinkles said this will inevitably mean frequency “adjustments,” obviously reductions. This may be interesting on predominately domestic routes where frequency is often disproportionately important – at least if there’s reasonable overland access.

This may be the point. “Shorter overland markets are under severe pressure for the foreseeable future,” Hinkles pointed out.  Edinburgh and Glasgow to Birmingham, for example, is “now a shadow of its former self.”

“Historically, the rule of thumb was that people would drive or train on routes four hours or less.  Now, that’s six to seven hours.”

This will clearly influence Loganair’s network and future development.