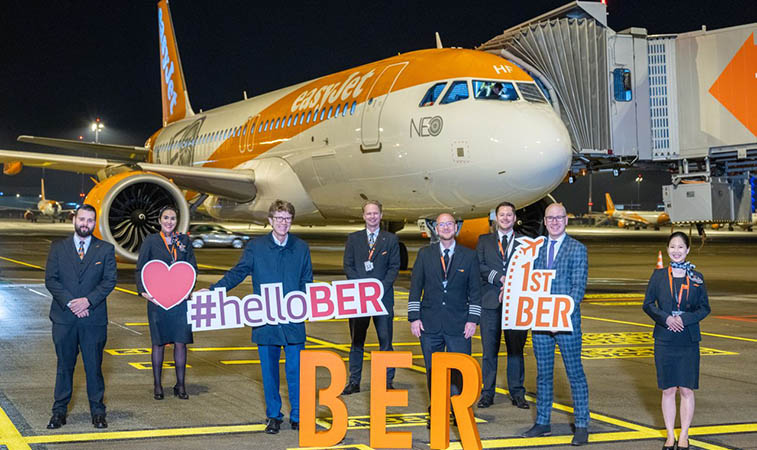 easyJet flight 8210 was the first scheduled departure from Berlin Brandenburg, destination: London Gatwick. The carrier had over 481,000 passengers between Gatwick and Berlin in 2019.

easyJet had the first scheduled departure from the brand-new Berlin Brandenburg on 1 November, marking the start of this new airport.

481,143 flew between Gatwick and both Schönefeld and Tegel in 2019, the UK CAA’s indicates.  easyJet was the sole operator.

easyJet is currently operating Brandenburg – Gatwick twice-weekly. It picks up in December and it’ll be 11-weekly by mid-January.

The LCC’s departure to Gatwick was followed by other company departures to Amsterdam (departed at 0708) and Palma (0728).  The first non-orange take-off was by Ryanair to Bologna at 0746.

The first arrival to touch down was Wizz Air from Varna at 0728.  It was followed by Ryanair from Edinburgh at 0910 and Turkish Airlines from Istanbul Airport at 1008.

Brandenburg opened Terminal 1 on 31 October, joining Terminal 5.  Because of coronavirus, the opening of Terminal 2 has been postponed until March.

Read more: Brandenburg will have 83 routes in the week starting 8 November, with Munich top.