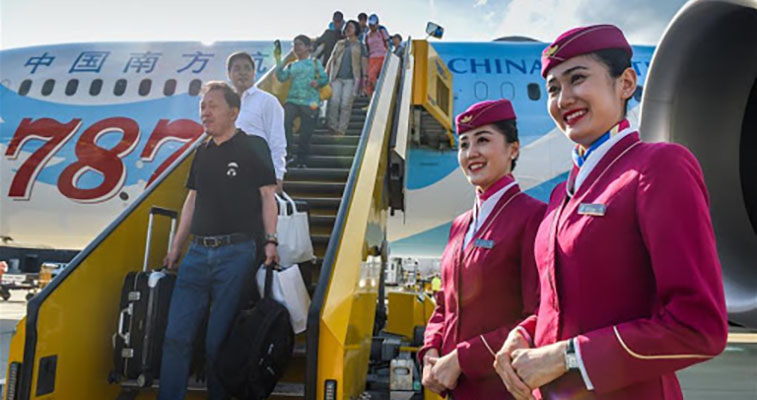 With 52% of Guangzhou’s flights, China Southern is overwhelmingly the top operator. And 15% of the airport’s seats are by widebodies, the same percentage YOY.

Guangzhou’s domestic flights are up by 18% YOY to 4,335 each way, based on the week commencing 14 November.

Guangzhou has well and truly recovered, by capacity at least – but only domestically.

Internationally, flights are almost non-existent, down as they are by 94% YOY.

Read more: Cathay Dragon had had 14 million seats and 51 routes, including Guangzhou.

The significant drop in international necessarily means that Guangzhou’s domestic frequencies have risen to 99% of its total – up from 79%.

If the airport’s domestic and international flights are both considered, they’re down by 259 – 6% – in this week.

Guangzhou’s domestic flights are up by 18% a week YOY and by 11% versus the peak week in 2020 pre-coronavirus. Source: OAG Schedules Analyser.

Guangzhou has 123 domestic destinations in this week.  Only Shanghai Pudong (128) and Chengdu (139) have more.

Guangzhou’s top-10 domestic routes, shown below, have 40% of the airport’s flights.  Shanghai Hongqiao is the top route with 266 services each way.

The top-10 routes have an average of six airlines, with Hangzhou number-one with 10.  Chengdu follows with nine.

China Southern is by far Guangzhou’s leading carrier with a 52% share of flights, distantly followed by China Eastern with 9%.  China Eastern has 505 more one-way flights this week YOY. 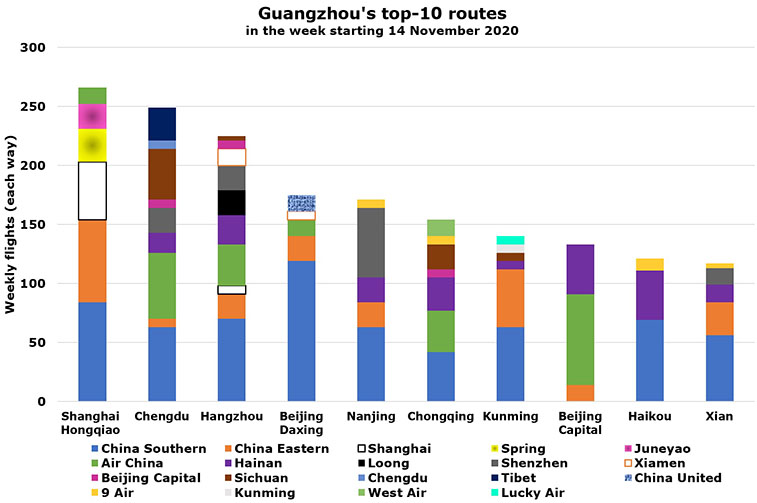 Guangzhou’s top-10 routes in this week are led by Shanghai Hongqing with 266 flights each way across six operators. Source: OAG Schedules Analyser.

15% of Guangzhou flights are by widebodies, flat YOY

Not surprisingly, China Southern is dominant on all but one of Guangzhou’s top-10 routes.  The exception is Beijing Capital, which is now unserved by the carrier since it moved to Daxing in September 2019.

15% of Guangzhou’s flights are by widebodies, the same percentage YOY.  Interestingly, the absolute number of widebodies has gone up by 89 in this 2020 week.  However, the biggest change is that there are now no A380s operating domestically; China Southern previously operated its 506-seat A380s to Beijing Capital 14-weekly.