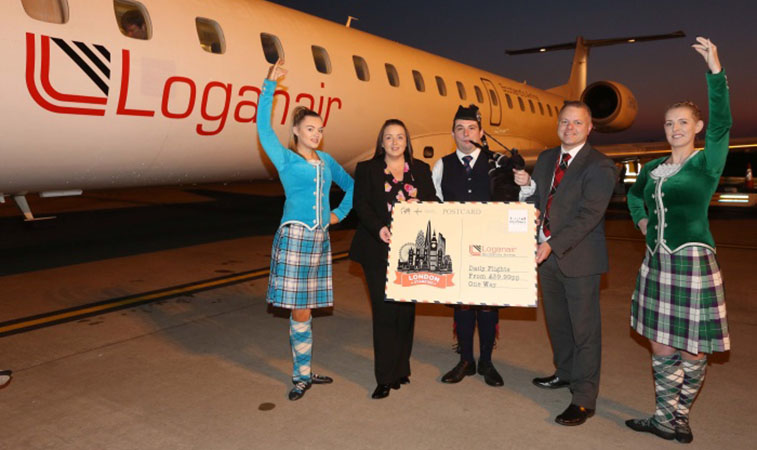 Loganair will begin Isle of Man to Heathrow in December, replacing its London City service that started in September. While it doesn’t yet have slots for S21, it is believed that it is very confident that it will.

Loganair will begin Isle of Man to Heathrow from 1 December, with its current London City service ending the previous day.

Initially operating six-weekly (no Saturday), it’ll increase to seven-weekly from 19 December.  All flights will use 49-seat Embraer 145s rather than 48-seat ATR-42s it uses to City.

In October, Loganair’s MD, Jonathan Hinkles, told us that the Isle of Man government had been very keen to have Heathrow service again, after flybe launched it in April 2019.

But for Loganair, the route “must be part of a long-term plan”.

Currently, Loganair’s Heathrow plan is for W20 only.  However, a source close to anna.aero says that the carrier is “extremely confident” that it’ll get slots for S21 and that it intends to operate 21 weekly services on the airport-pair.

Loganair is also expected to announce more routes to Heathrow, using either slots granted to it or leasing from others.  One potential contender is Dundee, which also operates from London City.

Loganair’s focus on Heathrow is intriguing.  We first interviewed Hinkles in June.  His answer to whether Heathrow is of interest to the carrier could not have been clearer: “no”.

But opportunities change.  And Loganair is currently the sole operator on IOM – London. 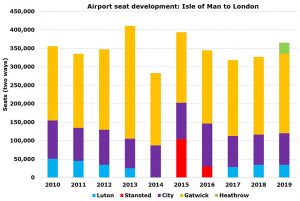 Please click to enlarge the image. Heathrow was connected to the Isle of Man in 2019 by flybe after an absence of many years. Loganair will link the island to Heathrow this winter. Source: OAG Schedules Analyser. 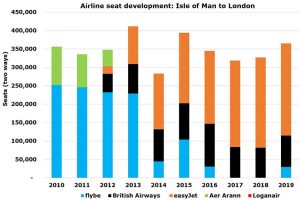 Please click to enlarge the image. easyJet had almost 70% of all seats on Isle of Man to London in 2019. For now, it’ll be only Loganair and easyJet on the city-pair.  Source: OAG Schedules Analyser.

Isle of Man to London had just over 365,000 seats in 2019, the third-highest year in the past decade.  This was across flybe (before it ended), BA CityFlyer, and easyJet.

easyJet had just short of seven in ten seats on its services to both London Gatwick and Luton.

For the first time this decade, Isle of Man was connected with four London airports in 2019: City; Gatwick; Heathrow; and Luton.

Heathrow, which was served in 2019 after an absence of many years, was the result of flybe beginning it.  This market the return of flybe to London since 2016, when it then served Stansted.

This winter, the Isle of Man will be connected with City (but ending), Heathrow, and Gatwick.  However, easyJet won’t restart Gatwick until February, meaning Loganair will be the sole operator until then.  A good and perhaps not coincidental gap.

Come next summer, and excluding any further changes and assuming Loganair gets S21 slots at Heathrow, the Isle of Man will once again be connected with three London airports – like it generally has been.