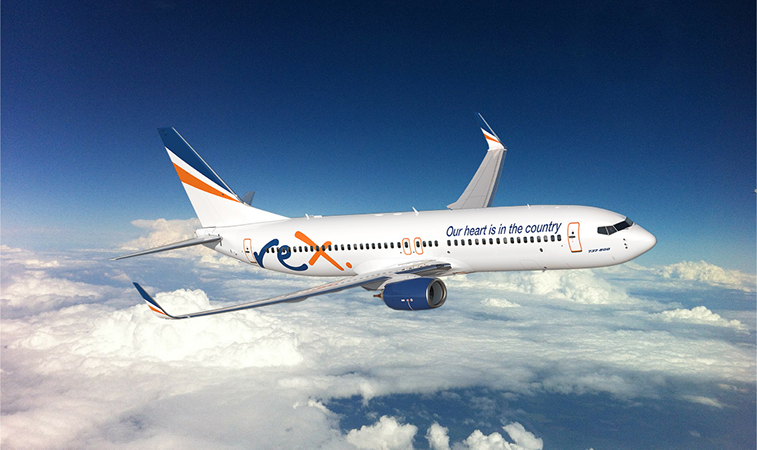 Rex will begin Sydney – Melbourne on 1 March using B737-800s in a two-class configuration.  Its aircraft are from Virgin Australia and will have the same seats.

Rex’s flights went on sale on 1 December.  From the start, it will typically operate nine-daily in each direction for a total of 58 weekly.

It’ll deploy three B737-800s on this airport-pair before another two join to begin Sydney – Brisbane from April.  If successful, Rex expects 10 aircraft by YE 2021, the start of its intention to be a widespread core market operator.

Competition on Australia’s core trunk routes, and especially the ‘golden triangle’, will be intense in the short-to-medium term.

Rex’s huge initial volume on Sydney – Melbourne is potentially a record in recent years for a new entrant.  Clearly, high frequencies and therefore usability is needed to stand a chance of ‘winning’ the business travellers that it’ll be targeting, the very customers that Qantas and Virgin Australia target.

But Rex’s new focus on the thickest of domestic markets is far removed – and therefore very risky, including in terms of distraction – from its bread-and-butter of thin regional operations using Saab 340s.  The carrier had almost 3.1 million seats in this role in 2019, OAG data shows.

Is Rex’s move sensible?  Vote at the end of the article. 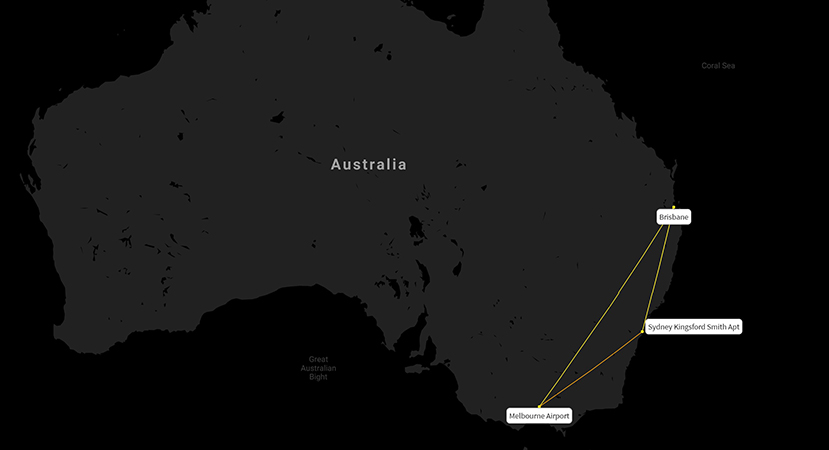 Australia’s ‘golden triangle’, which Rex will initially focus on.

Sydney – Melbourne had just shy of 10 million two-way seats in pre-coronavirus 2019.  This was up by over a million since 2010, although five years had more seats than last year.

The airport-pair was the world’s fifth-largest domestic market in 2019, just behind Ho Chi Minh City – Hanoi but ahead of Delhi – Mumbai.

Reeling from coronavirus and very little business demand, Tigerair’s end, and Virgin Australia’s woes, Sydney – Melbourne flights will be down by 51% YOY from 524 to 259 when Rex begins on 1 March.

Rex’s entry will mean four operators will again serve the market.  It’ll have the fewest weekly flights (58), while Jetstar will have the most (95).  Jetstar’s flights will grow by 94% YOY to 13 daily, far more than Qantas’ percentage decline (-66%).  Jetstar’s volume will be its highest ever.

Jetstar is clearly responding to Tigerair’s exit, with almost the same number of flights added.  But it is likely to also be the Qantas Group using Jetstar’s lower-cost platform given leisure/VFR is very significantly more important now than business travel. And the rise of Jetstar and the decline of Qantas will help to show regulators a different competitive scene pre-Rex.

Perhaps Rex’s entry – amid big capacity cuts and Virgin Australia’s strategic reorientation towards a mid-level airline – will prove fortuitous.  But it is a big gamble, especially against two renowned operators who revolve around business travel, the distraction involved, and because it appears that it’ll occupy the same space that Virgin Australia will move towards. 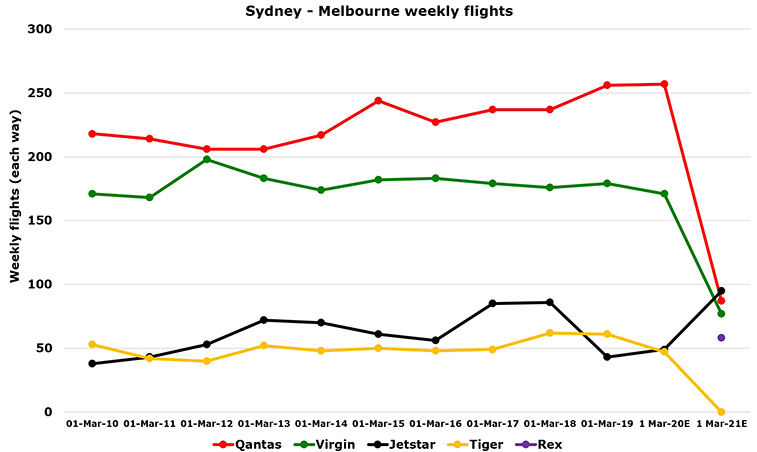