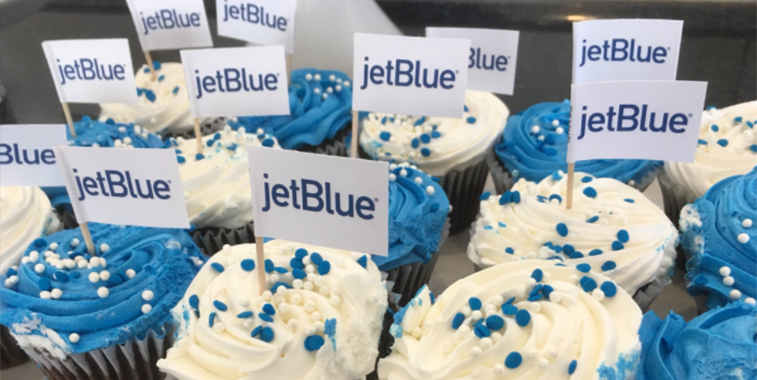 JetBlue is to serve Miami with four routes. In W20, the carrier’s Florida seat capacity will represent 49% of its total, up from 47% YOY.

JetBlue is to fly from Miami with four routes from 11 February.

This builds on Southwest’s entry into the South Florida airport with six routes (its initial four and Denver and Nashville), together with Frontier expanding its Miami presence to 23 routes in W20 from 14 in W19.

In the week JetBlue begins from Miami, OAG data shows that it’ll have 179 weekly flights in each direction both Miami and Fort Lauderdale to New York-area airports – up by one-quarter YOY.

To Los Angeles, on which it’ll deploy its Mint-equipped A321s, it’ll now have 49 weekly flights from both South Florida airports for a 55% share of non-stop frequencies.

On all four routes, JetBlue will face 187 flights in direct competition, with the carrier adding nearly 50% more frequencies on top.

For JetBlue, will Miami be a longer-term endeavour, supplementing core Fort Lauderdale, or is it simply to avail of cash-generating opportunities during the pandemic?  Vote at the end of the article!

Separately, the airline will also begin Key West to both Boston and New York JFK from 11 February. Both will be five-weekly by the Embraer 190 and neither will have direct competition.  Boston had 28,000 indirect passengers last year, booking data from OAG Traffic Analyser reveals.

This winter, JetBlue will have 134 routes from Florida involving nine airports in the state.  This is up from 113 routes and seven airports YOY following the loss of Daytona Beach in January 2019.

Not surprisingly, Fort Lauderdale has around 1.4 million more of the airline’s seats than second-ranked Orlando.

Despite more routes, this winter JetBlue’s Florida seat capacity is down by 29% YOY from 10.4 million to nearly 7.4 million.  Fort Lauderdale saw 1.4 million cut and Orlando one million.

Yet, JetBlue’s Tampa seats are up by 2% YOY, albeit only an increase of around 13,000.  This is from its network increasing from six to 13 destinations in W20 with the addition of Cancun, New York La Guardia, Philadelphia, Providence, Raleigh Durham (coming), Richmond, and Washington National. 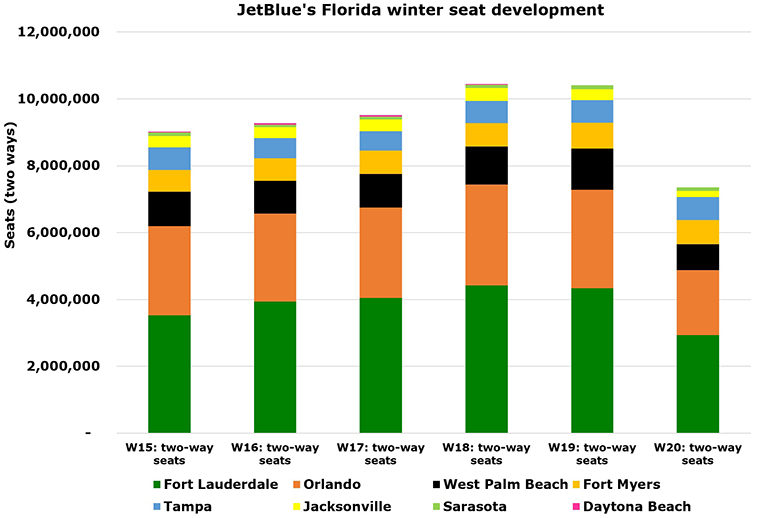 Miami will mean that JetBlue again serves eight Florida airports. Of its existing seven, only Tampa saw an increase in seats YOY from its network doubling in size. Source: OAG Schedules Analyser.