Swoop has 15 routes this winter; Edmonton to Abbotsford top 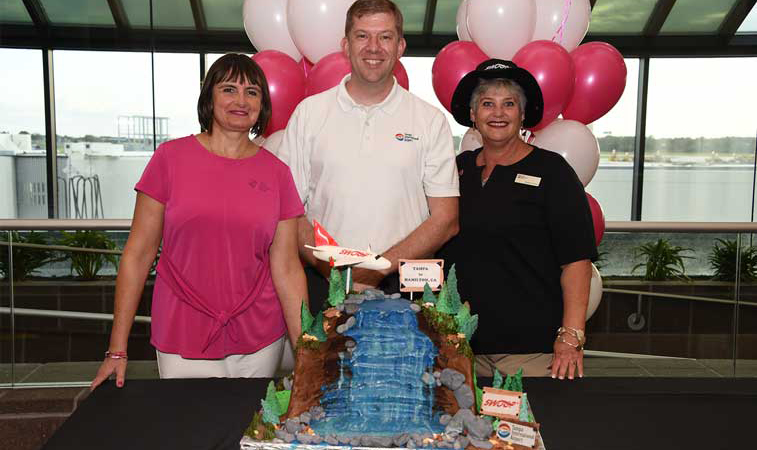 In the current winter, Swoop has 15 routes, down from 37 year-on-year.  Seven are domestic and eight international.

Last winter, 53% of its seat capacity was international.  Now it’s just 31%, as domestic becomes more important – like for many airlines dealing with coronavirus. Domestic has risen from 47% to 69% of its capacity YOY. 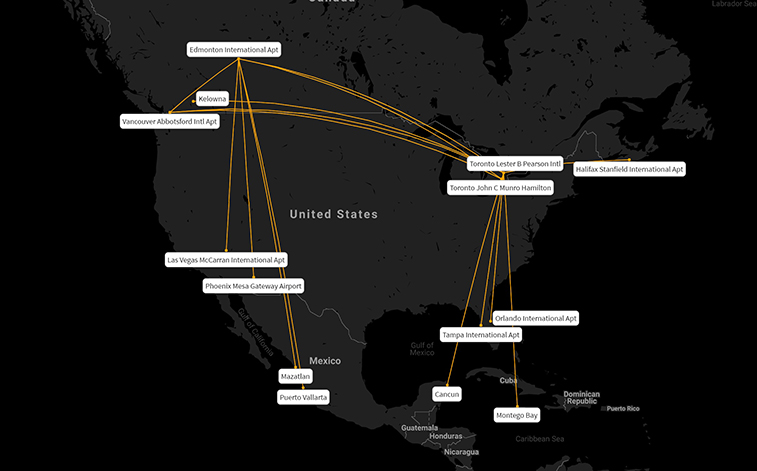 Swoop has 15 routes this winter, with Edmonton its top airport by seat capacity. Source: OAG Mapper.

Edmonton remains Swoop’s top airport while Abbotsford is third.  However, the second-ranked has changed: while it was Hamilton, it is now Toronto, a new airport in its system.  Hamilton is now fourth.

Swoop served Hamilton for the city, Canada’s ninth-largest.  It also somewhat acted as an alternative to both Greater Toronto and the Buffalo, New York, area.

Swoop had over three-quarters of Hamilton’s seats last winter across 11 routes.  Now it has two: Abbotsford and Edmonton.

This winter, Swoop has eight routes from Pearson, of which five transferred from Hamilton.  Orlando and Tampa, which both moved from Hamilton, begin on 11 February. Tampa is initially twice-weekly before doubling, while Orlando starts and continues at five-weekly.

Abbotsford to Edmonton remains Swoop’s top route YOY, with one-fifth of the airline’s total capacity. The carrier’s parent, WestJet, transferred the route to its lower-cost subsidiary in 2018. Swoop is now the sole operator on the airport-pair after Flair Airlines ended it.

Cancun – Toronto, meanwhile, is Swoop’s top international route.  The carrier is one of five on the route (six if Air Canada Rouge is counted separately) and it has the third-highest share of capacity at 15%, almost half of its parent’s. 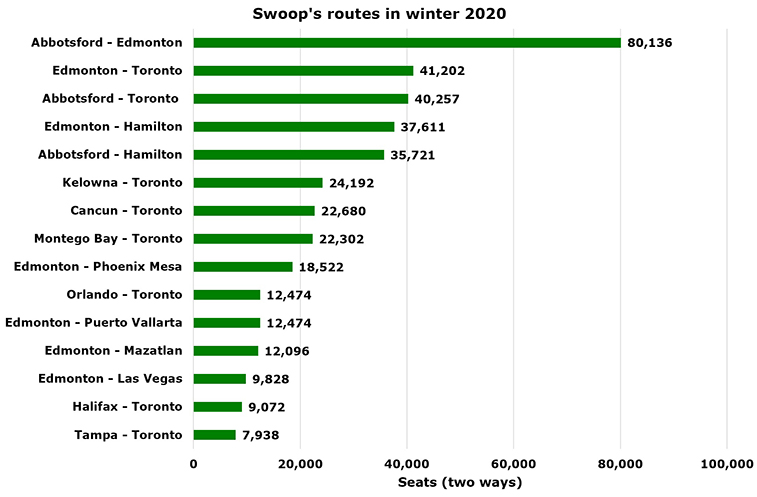 Abbotsford – Edmonton has one-fifth of the carrier’s capacity this winter.