Cairo has 72 routes across 32 airlines this week 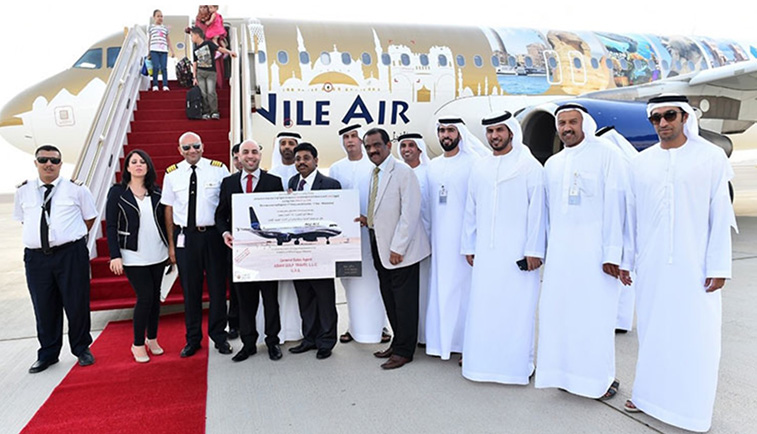 Saudi Arabia is by far Cairo’s top country market.  Egypt’s Nile Air is an important operator between the two, with nine destinations served this week.  When core markets are stripped out, it serves six regional centres.

Cairo has 716 flights each way in the week beginning 12 January, OAG data shows.

EgyptAir has a 62% share of these; in the past decade, the carrier’s dominance has fluctuated between 47% and 60%.

In all, Egyptian carriers have just over seven in ten flights, while LCCs – subject to various restrictions at Cairo – have just a 2% share.

The Egyptian capital’s domestic market – which largely revolves around foreign tourists – has been especially hard-hit.  While domestic markets are been relatively better off around the world, this is because they are primarily used by nationals.

Still, three markets – Aswan, Sharm El Sheikh, and Luxor – appear in the top-10 list, just with far lower frequencies than previously.  Aswan, for example, is down by 63%.

With 70 weekly flights each way, Jeddah is by far the top market.  It is currently served by Air Arabia Egypt, Air Cairo, EgyptAir, flynas, Nile Air, and Saudia. 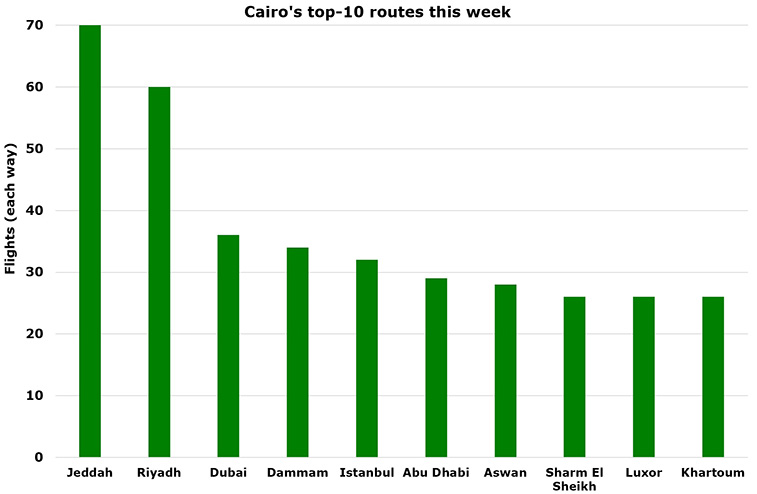 Various new services between Cairo and the Middle East have materialised recently.  The Air Arabia Group, for example, launched Abu Dhabi, Jeddah, Riyadh, and Dammam in the past few months. Source: GDS.

Cairo dominated by the Middle East and Africa

The Middle East has 55% of Cairo’s flights this week, followed by Africa with almost one-third.

Khartoum just fell within the top-10 routes.  The Sudanese capital has 26 flights to Cairo with up to five daily services across Badr Airlines, EgpytAir, and Tarco Aviation.  Badr mainly uses B737-500s on the 1,614-kilometre service.

Europe comes in a distant third with 13% of flights, down from 18% YOY in percentage terms – and down by 46% in absolute volume.  It does better than both North America and Asia, the latter currently non-existent.

While EgyptAir has almost three-quarters of all Cairo – Europe flights, 13 airlines operate. TAROM is the least-frequent operator, with its Bucharest service currently once-weekly, although it’ll treble come April. 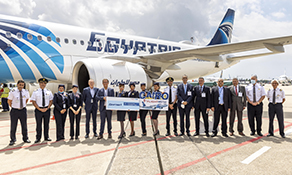