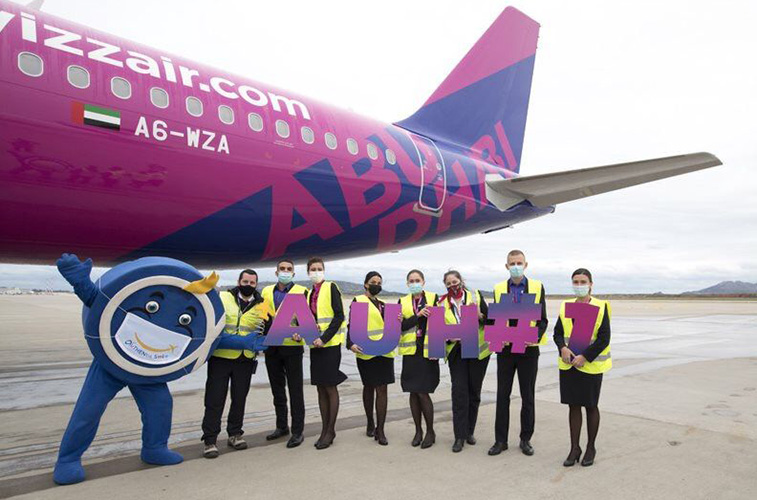 Athens was Wizz Air Abu Dhabi’s first route to take off.  It’ll be joined by a second to Greece on 4 February.

Wizz Air Abu Dhabi was launched on 15 January after its first route – to Athens – took off.  Athens is presently served twice-weekly, but will increase by to three-weekly.

The ULCC currently has 13 routes bookable from the UAE capital, with its second – to Thessaloniki – launching on 4 February.

Tel Aviv will then follow on 17 February at an initial four-weekly; it’ll be the most-served of the carrier’s early routes.

Wizz Air Abu Dhabi is the fifth airline to fly between the UAE and Israel.  It’ll compete directly with Etihad from 28 March – by which time Wizz Air will have a daily offering – and indirectly with flydubai, El Al, Arkia, and Israir from Dubai.

Only eight of Wizz Air Abu Dhabi’s initial routes use that AOC.  The others, all to Central and Eastern Europe, use its original Hungarian AOC.

Come mid-April, its present routes will have 33 weekly flights each way.  Its Abu Dhabi AOC will have 23, precious few for four 239-seat A321neos.

The schedule for the airline’s first four aircraft in mid-April is shown below.  Clearly, significant gaps remain, suggesting multiple new routes will be announced shortly.

Indeed, it could potentially announce up to 16 new routes for these aircraft, excluding having a spare, at a twice-weekly frequency, assuming four sectors per aircraft daily.

It is likely that Wizz Air Abu Dhabi will announce some Middle East routes, perhaps to Doha given the end of the Qatar blockade.

Aircraft three is available for a few hours in the early morning of each day, unless it is to fly overnight. Doha could be scheduled as 0710-0710, 0755-1005, which would be good on four days.  However, it would be sub-optimal, with relatively short distance flown per aircraft per day not offsetting only four sectors per day.

Meanwhile, the other three aircraft are available late afternoon/early evening too on most days that are already scheduled.

Perhaps Wizz Air will launch longer sectors that arrive back midnight to 0400. Thessaloniki arrives back at 0140.

Distances of up to around 3,450 kilometres would likely fit, covering most of South Asia, Africa down to Kenya, most of Central Asia, and parts of southeast Europe.  Where do you think will be next?  Vote at the end of the article!