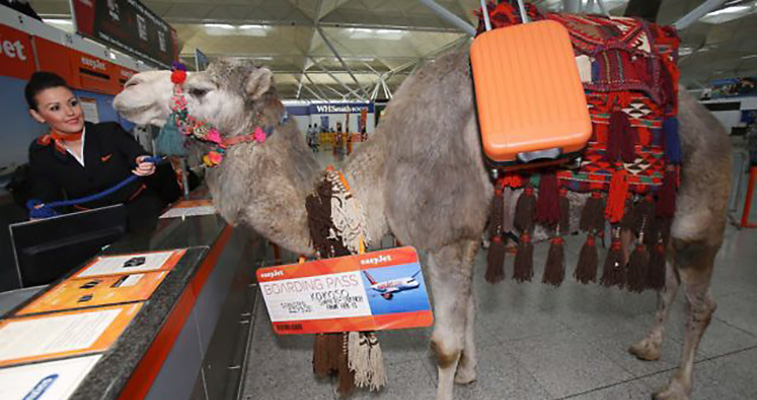 Egypt has been a particular winner for easyJet this summer, with seats up by 655% over S19 with 10 routes added.

easyJet’s holiday division has reportedly seen summer bookings rise by 250% year-on-year, although this is of course from an unprecedentedly low level.

This reflects growing confidence as vaccinations are increasingly rolled out, the hope of lockdowns coming to end, and light at the end of the tunnel.

This summer, easyJet has 836 routes scheduled, OAG data indicates, down by nearly one-fifth from 1,013 in pre-coronavirus – and obviously normal – summer 2019.

153 routes are scheduled for S21 that were not operating in S19, although this falls to 80 when new Berlin Brandenburg is excluded.

easyJet’s top route this summer is Amsterdam – London Gatwick, the same as in S19.  However, there has been much change across the rest of the list. 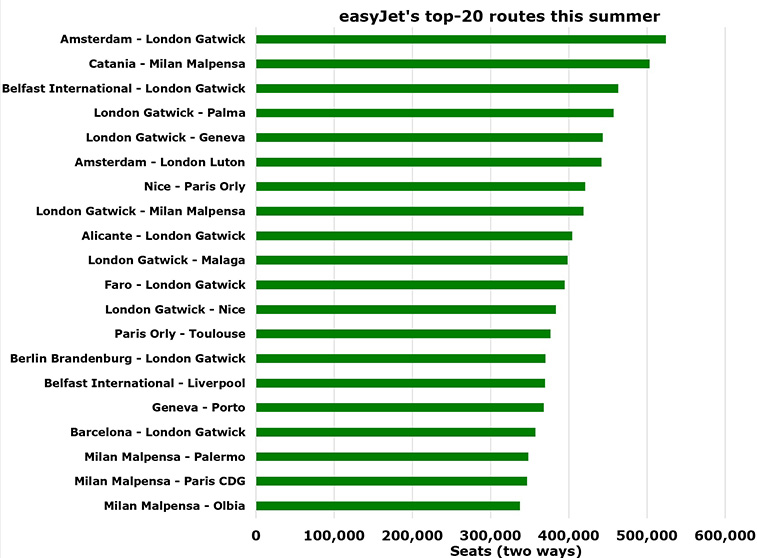 There has been significant movement within easyJet’s top-20 routes. Source: OAG Schedules Analyser.

Multiple routes that were in the top dozen – especially domestic Germany, including Berlin to Cologne, Düsseldorf, Munich, and Stuttgart – have all been cut.

This is part of the carrier’s significant consolidation, with Germany capacity down by 49% this summer – by far the highest of all core countries. It now serves seven German airports, down from 12.

Catania to Milan Malpensa, meanwhile, has jumped from 16th to second.  This is mainly in response to Wizz Air’s entrance and bases at both Malpensa – easyJet’s second-largest base – and Catania, and its new domestic Italy services.

Indeed, easyJet’s intra-Italy capacity has increased by 16%.  This is the result of increased capacity on core routes given its network has reduced by seven routes.

Spain, however, is down by 767,000. This is mainly from big cuts to mainland destinations and larger cities, together with the loss of Jerez and Reus.  The Canary Islands, by contrast, is up by nearly half.

Turkey’s seats will nearly double to over 1.2 million.  It’ll have 19 routes, up from 17, with nearly across-the-board capacity rises. Gatwick to Dalaman, its top route, is up by 153%. 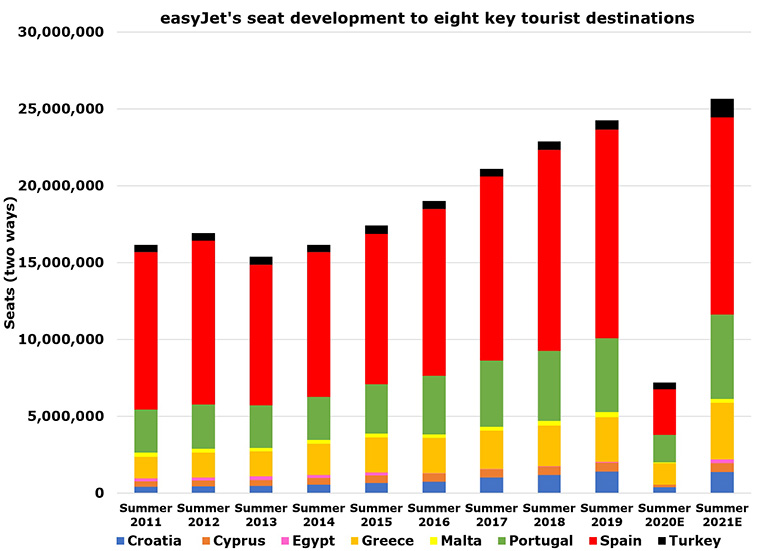 Spain is down over S19, but Greece, Portugal, Turkey, and Egypt have seen over 2.2 million seats added versus S19. Source: OAG Schedules Analyser.