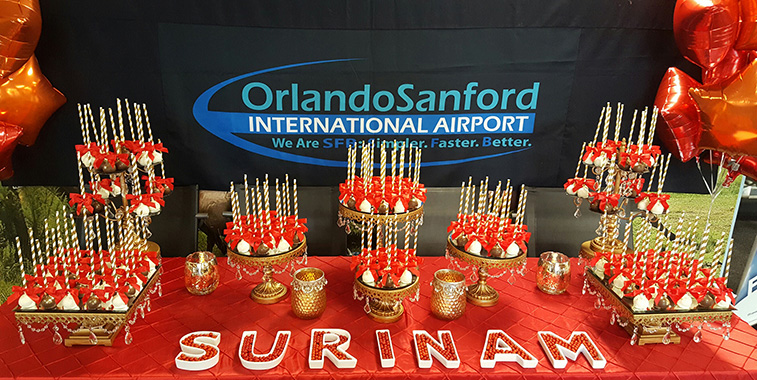 Although not currently operating, Surinam Airways launched Parimaribo – Orlando Sanford in 2015.  With a once-weekly peak-summer frequency, it tended to route via Georgetown in both directions, although Aruba took its place in 2017.

Surinam Airways will probably not grow much beyond what it has in the past decade.  It ended 2019 with nearly 515,000 seats, the second-lowest since 2011, before the pandemic took hold.

Because of differing languages, cultures, histories, geographies, and more, Surinam Airways serves just two destinations across the continent: Georgetown in neighbouring Guyana and Belém in Brazil.

The reason for its limited South American network is, as ever, a lack of demand.

Excluding Belém – Gol joined Surinam Airways in 2015 and will resume service from this summer – total traffic to Brazil, for example, was less than 5,000 in 2019, booking data shows. 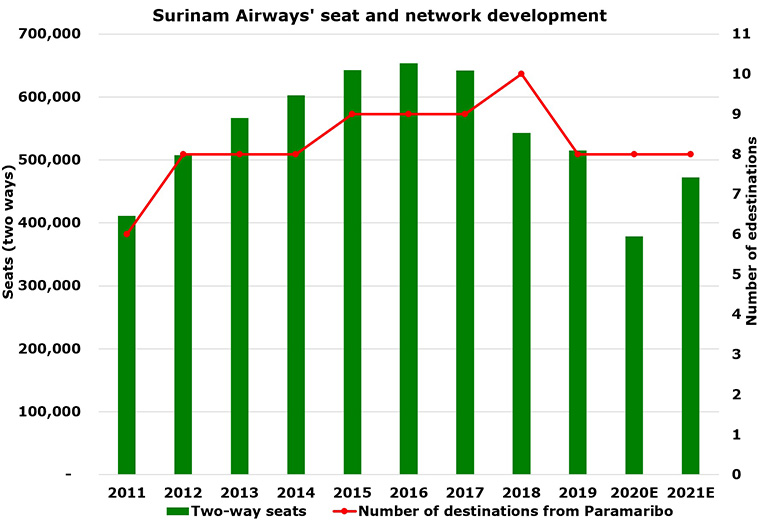 Surinam Airways’ growth until 2016 was mainly from the launch and/or rise of Cayenne, Georgetown, Miami, Port of Spain, and Orlando Sanford. Source: OAG Schedules Analyser.

This present year, Surinam Airlines will have eight destinations from Paramaribo and 11 routes in all. A number operate as one-stops.

On an airport-basis, its route to Amsterdam is – predictably – by far the most significant, with around a one-quarter share of seats.

It currently serves Schiphol once-weekly using B777-200s (and later by A340-300s), but it’ll rise to four-weekly from 26 March.  It competes with KLM’s four-weekly alternative, growing by one from 24 April.

Miami is its next-largest destination, which it serves in three ways: non-stop (typically once-weekly); via Georgetown (three-weekly); and Aruba (twice-weekly).  Until its non-stop resumes in March, Georgetown is four-weekly.

On a regional basis, it is the Caribbean that is top, with routes to Aruba and Curaçao in the Dutch Caribbean – for the obvious historical reasons –  together with Port of Spain.

Port of Spain resumes from 2 March on a three-weekly basis via Curaçao.  Curaçao will increase to four-weekly from June, with the additional service via Aruba, 120 kilometres away. 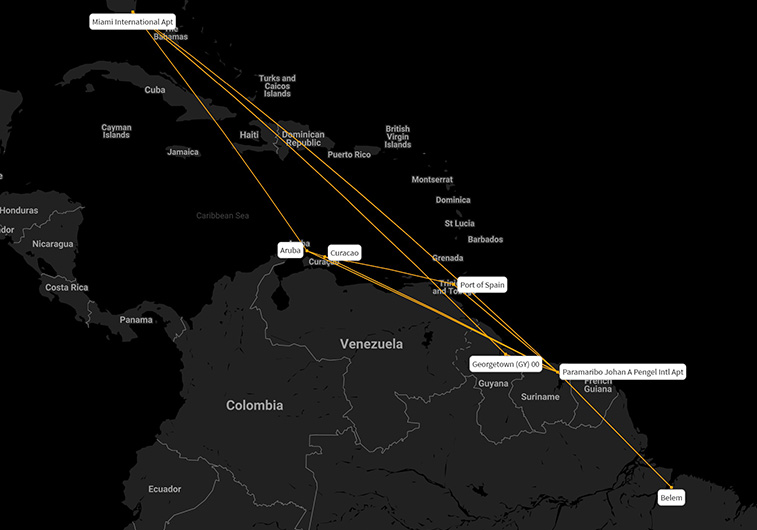