Sarajevo aims for two based aircraft; what routes most likely? 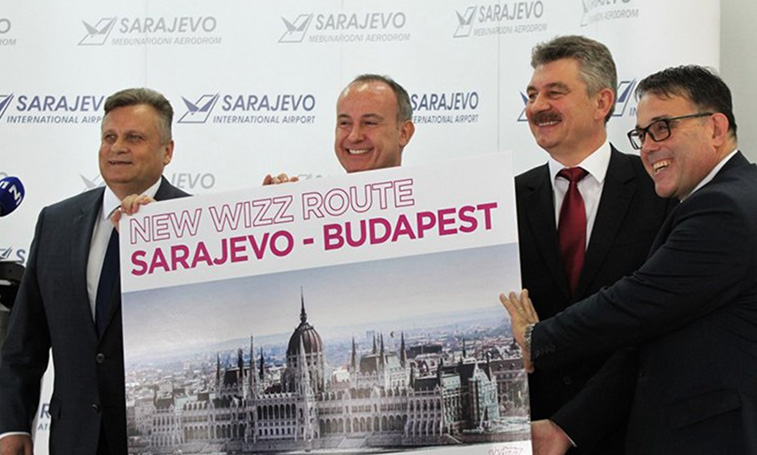 Wizz Air has one route from Sarajevo: Budapest. This came about following the end of Malev. It’s currently served twice-weekly, but is not bookable after the end of the winter.  Wizz Air’s main airport for Bosnia and Herzegovina is Tuzla, at which it had over 660,000 seats in 2019.

Sarajevo in talks with a “successful European airline” for two based aircraft. It is very keen, so whoever it is – probably Wizz Air or Ryanair – would probably get an excellent deal.

Sarajevo’s keenness is from the end of scheduled flights with FlyBosnia, although it was reported in December that the carrier is to lease three A320s – replacing its sole A319.  Given the on-going issues between the carrier and airport, its resurgence will be separate to the tender.

Read more: FlyBosnia began Sarajevo to Luton on 24 September 2019. London is now unserved from all of Bosnia and Herzegovina.

Sarajevo’s desire for based aircraft is from the fast growth of Wizz Air at Tuzla, located some 119 kilometres away, and to a much lower degree Ryanair at Banja Luka (241 kilometres).

Sarajevo is very underserved, with over half of its traffic flying indirectly in 2019, booking data shows. 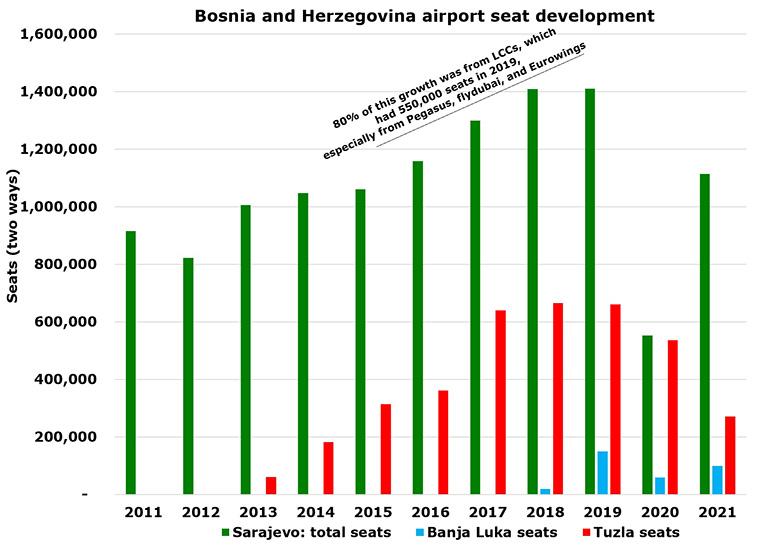 Pre-coronavirus, Tuzla had over 660,000 seats, around half of Sarajevo’s capacity and more than the capital’s LCC seat volume. Source: OAG Schedules Analyser.

Up to 21 routes likely for Sarajevo

Assuming two aircraft and a ULCC, which would make the most sense, it could have 14 to 21 routes, each at three- or twice-weekly.

The markets illustrated below are Sarajevo’s largest unserved and those very underserved. They are based on Sarajevo’s traffic only and exclude leakage to Tuzla and Banja Luka and bus traffic.

Most are about Bosnian VFR, especially Germany, Switzerland, and Scandinavia.

The Turkish opportunities are very unlikely as the winning carrier won’t have a Bosnian AOC, but they have strong P2P demand before stimulation. For example, 17,000 for Ankara and 13,000 for Izmir.

From Sarajevo, most routes would be within the LCC sweet spot of one to two hours, meaning more sectors per aircraft per day and therefore more passengers and more negotiating ability. 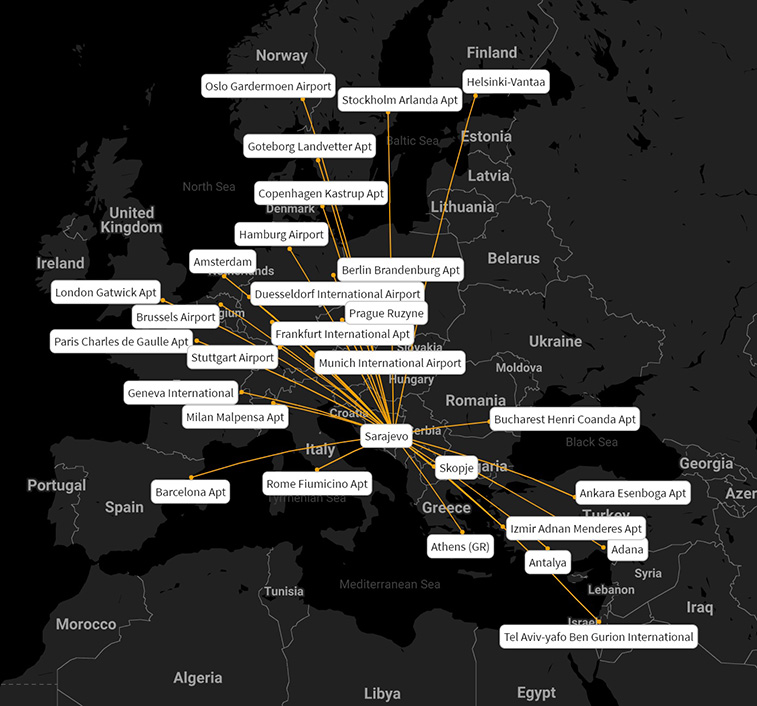 These are Sarajevo’s top unserved or very unserved markets in 2019 based on booking data obtained via OAG Traffic Analyser. Note that any specific airport, like CDG or Gatwick, is just a proxy for the whole city.