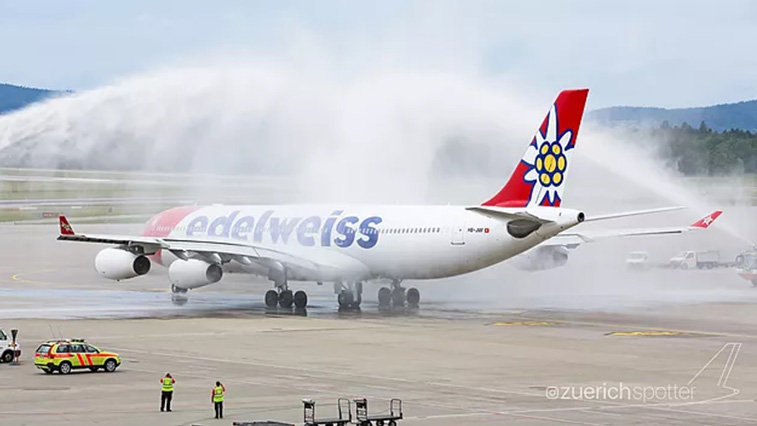 Despite almost all of Edelweiss’ routes being holiday-orientated, it has VFR markets too. These include Pristina – its top route this summer – along with Skopje and Tirana.

Edelweiss has nearly 2.3 million seats scheduled for this summer, its highest to date and up by nearly 6% over S19.

This is based on 72 routes – all bookable – an increase from 68 over pre-coronavirus S19. Figari starts on 29 March.

Another route – Newquay – is filed in OAG but not yet bookable, so it hasn’t been counted.  It is scheduled to operate once-weekly for 11 weeks between July and September.

Edelweiss’ network is solely from Zurich, at which it has a 10% share of seats this summer, up from 9% in S19.

Widebodies – A330-300s and A340-300s – play an important role in Edelweiss’ network, with an almost one-quarter share of capacity this summer.  Montego Bay, its next long-haul destination, begins on 29 March. 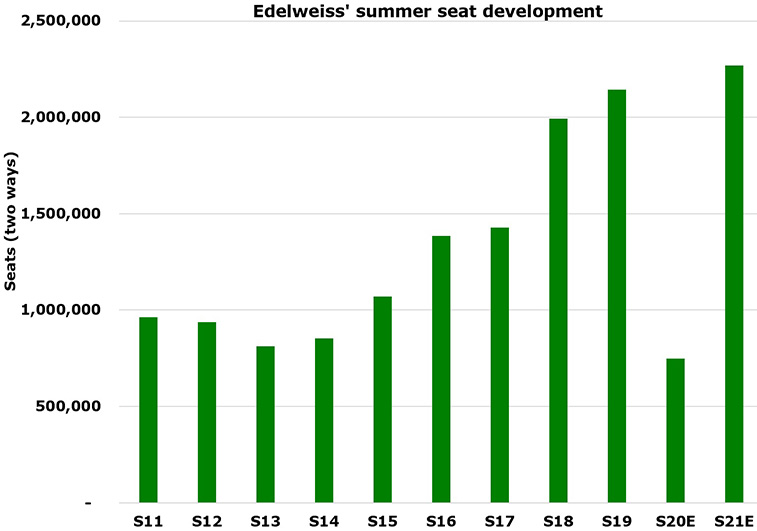 The leisure operator is, of course, enormously about the summer.  Since 2011, this season has had an average of 133% more capacity than winter, although S18 versus W18 was just 97%. Source: OAG Schedules Analyser.

Of its 32 served countries, Spain and Greece are naturally by far the most significant, with 17% and 16% of seats respectively.

Its network to Spain comprises 11 routes, led by some margin by Palma, its second-thickest route.  Greece also has 11, with Heraklion, its fourth-largest route overall, top.

Bulgaria, meanwhile, is Edelweiss’ least-served country, with just a once-weekly operation to Varna lasting for eight weeks in July and August. Next is Norway, with Tromso served once-weekly for nine peak-season weeks.

Edelweiss’ widebody network comprises 19 destinations, or just over one-quarter of its total.  Punta Cana is top; it’ll have three-weekly non-stop services, of which one will continue to Montego Bay.

Seven of its widebody destinations are in North America, which – in order of capacity – are Las Vegas, Vancouver, Tampa, Calgary, Denver, Orlando, and San Diego.  This region has over one-third (33%) of its widebody capacity.

An interesting addition is Muscat.  Edelweiss will serve it once-weekly using A340s from 2 April, doubling from the end of May, and rising to three-weekly from September. 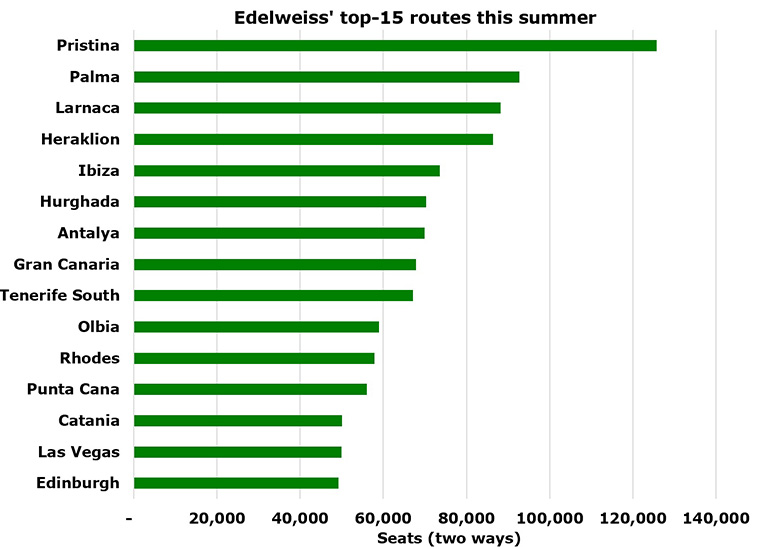