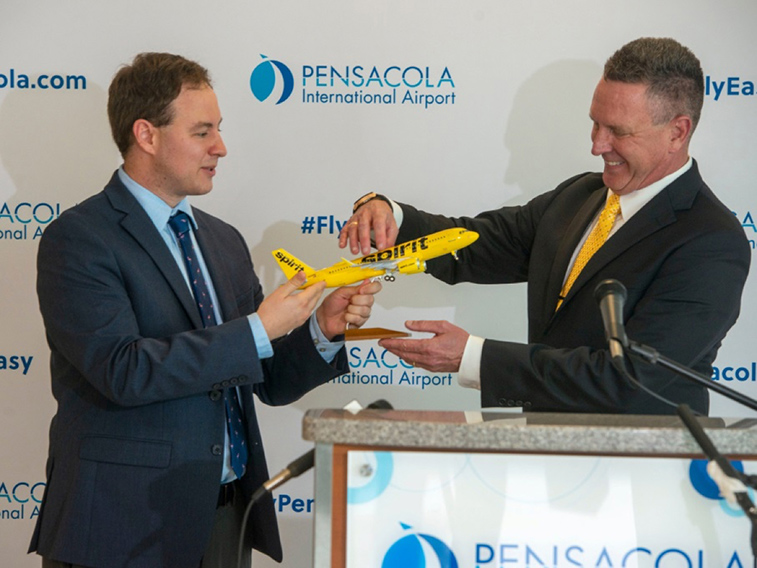 The ‘Spirit’ of Pensacola. Spirit Airlines recently announced that it will commence services to Pensacola Airport in Florida from 10 June, launching a total of seven services from destinations including Austin and Kansas City. Pictured at the announcement earlier this year are Nick Bartolotta, Director of Network Planning, Spirit Airlines, and Matt Coughlin, Airport Director, Pensacola Airport.

Having accommodated 812 million passengers in 2019 according to the Bureau of Transportation Statistics, the US domestic market, like all others around the world, took a big hit when the COVID-19 pandemic took effect last year. US domestic passengers fell to 336 million in 2020, a decrease of 59% versus 2019. However, like most in the industry, airlines are planning for the future post-pandemic as the vaccine rollout continues to progress. That is showing in North America as US airlines plan their domestic networks for summer 2021.

In the six-month period between March and August 2019, the top 12 US domestic carriers combined offered over 509 million departing seats. This dropped by 46% during the same six months in 2020 to 273 million. Based on statistics from OAG Schedules Analyser data, these same 12 airlines are currently poised to operate just shy of 457 million departing seats on domestic services for the same period of 2021, which is over 10% less than the offering seen in 2019, but an encouraging 67% gain on last year.

However, not all carriers are in growth planning momentum, with the below table indicating how the US’ top 12 airlines of 2019 are currently shaping up for the first part of S21 versus their pre-pandemic capacity.

JetBlue Airways and Spirit Airlines are leading the charge for growth in S21, with both highlighting a +20% increase in seat capacity for July and August versus what both flew in the same months of 2019. Allegiant Air is also showing a strong recovery, with a 21% growth forecast currently earmarked for July, while it is currently expecting to grow its August 2021 seat count by 16% versus its August total in 2019.

Data extracted from OAG schedules (from 22 March 2021) shows that at present, JetBlue Airways is planning to operate 216 US domestic routes in S21, up from 197 in S20, representing a net increase of 19 routes. However, a further deep dive into the schedules shows that 48 routes filed for S21 were not operated in S20, meaning 29 have been cut.

The biggest change to JetBlue’s schedule is its arrival in Miami, an airport which joined the carrier’s network in February this year. The airline now links the Floridian airport with New York JFK, New York Newark, Boston and Los Angeles. A further route from Hartford is planned to commence from June. Overall it will offer just shy of one million seats from Miami in S21, accounting for 4.2% of the carrier’s total seats this coming summer.

Spirit Airlines, like JetBlue, has a similar number of routes planned to be flown in S21 (250 US domestic routes in S21 based on OAG), with files indicating that the ULCC is planning to operate 35 routes this upcoming summer which it did not operate, or plan to operate, in S20.

It should be noted that airline schedules are ever-changing at the moment, and that the data shown in the table above is ever-changing, but it does indicate which airlines are planning ahead with optimism and truly have growth in mind for the upcoming summer season.

Miami Airport joined the JetBlue Airways network in February, with the carrier being greeted by this water cannon salute. The airline is currently showing to be a tour-de-force in the US domestic market this coming summer, as its June-onward capacity planning is filed to be greater than what it operated in S19 based on latest information from OAG Schedules Analyser data.