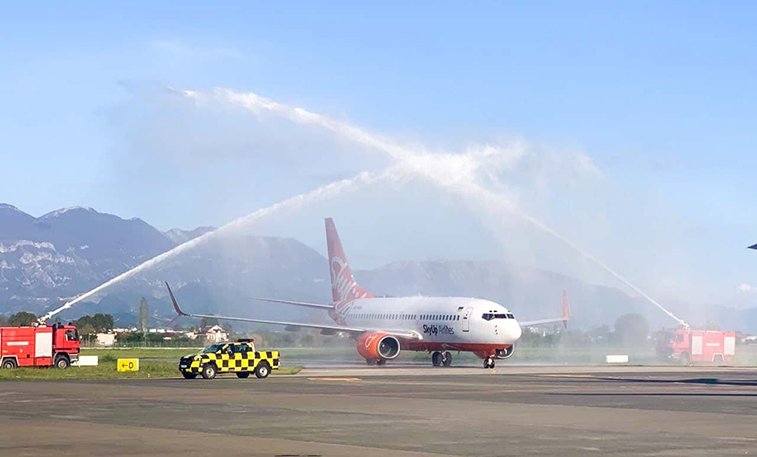 On 25 April SkyUp touched down in Albania when it launched flights between Kyiv Boryspil and Tirana. The carrier plans to link the Ukrainian and Albanian capitals five times weekly from mid-May, with Tirana currently one of 50 routes the airline plans to serve from Boryspil this summer.

SkyUp launched in 2018, initially with a 737-800, with its first service being between Kyiv Boryspil and Sharm El Sheikh. According to the airline’s website, it presently has six 737-800s, two 737-700s and three 737-900s. While it does have bases in Kharkiv, Lviv, Odessa and Zaporizhzhia, its main base is Boryspil, where based on OAG Schedules Analyser data and checked against the airline’s booking engine, SkyUp presently has 50 routes filed from the Ukrainian capital airport this summer. Overall, 59% of the airline’s departures from Ukraine on international routes this summer will take off from Kyiv.

The airline has plans for expansion, and it hopes to operate 18 aircraft in 2022, an increase of four versus its 2021 fleet target of 14 aircraft. This signifies that the airline is likely to add more routes to its network for S22. With those new aircraft including the likes of 737 MAX 8s and MAX 10s, its route network has the capabilities to spread further than the airline’s longest route currently on sale from Kyiv – Tenerife South – which has a sector length of 4,670 kilometres. Based on the airline’s current network, it is focused on Mediterranean leisure markets, along with strong VFR markets to regional cities in East Europe. However, further ventures are being made towards North West Europe, with London Luton among the airline’s newest destinations for this summer season.

Georgia’s top of the charts

The airline’s top route from Kyiv this summer is Tbilisi, a sector it plans to operate 10 times weekly (daily with a second daily rotation on Tuesdays, Fridays and Sundays). Georgia would appear to be the main market for the airline, with Batumi on the Black Sea Coast, being the airline’s second largest route from Kyiv this summer (daily). As can be seen in the table below, only three of the 50 planned routes will operate with at least a daily frequency, while only seven have more than four weekly departures. Among those in the top routes is Tirana, the airline’s newest route which commenced on 25 April. 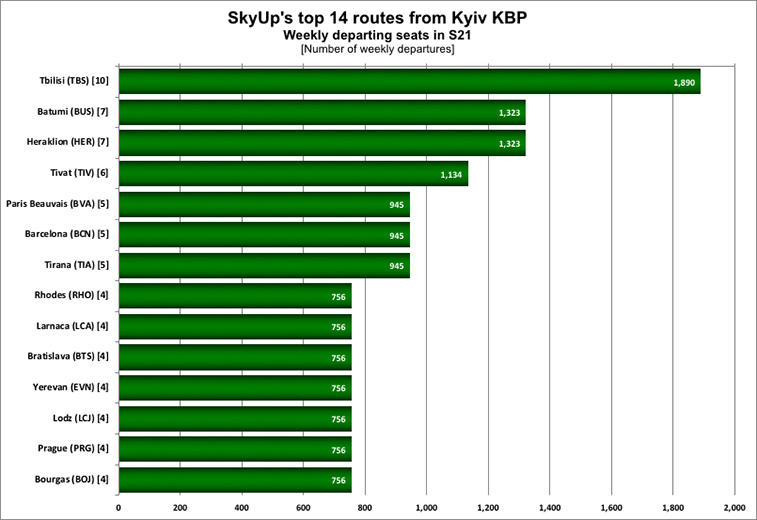 Among the airline’s newest routes this summer, which sit outside of the airline’s top 14 routes, are Gdansk, Lyon, Malaga and Rhodes. It should be noted that while most routes are filed for operating for the majority of the summer season, not all flights on published schedules are currently for sale. For instance, while Helsinki is filed to operate twice-weekly in August, only flights in May, June and July are currently on sale. Of the 50 routes presently showing in OAG, only one of them is not currently bookable on the carrier’s website – Antalya – which is currently filed at a twice-weekly frequency. However, both departures are on a Monday morning, suggesting that only one of these flights will operate and both have been filed until schedules have been finalised.

SkyUp currently has 50 routes filed to operate from Kyiv Boryspil this summer, ranging from Almaty and Dubai in the East to London Luton and Tenerife South in the West. Overall, the carrier will offer over 29,000 weekly departing seats from Boryspil in S21 based on OAG Schedule Analyser data. 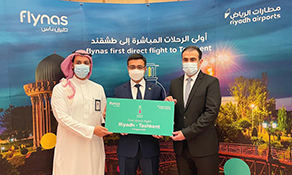