Milan Bergamo Airport unveiled its brand-new ‘HelloSky’ lounge on 8 June, part of the Italian gateway’s development programme to enhance the airport infrastructure and improve passenger experience. Incorporated as part of the new terminal expansion which opened last year, the new facility will be operated by GIS – the airport hospitality company specialising in managing lounges – a branch of the TAV Operation Services (OS).

Speaking at the inauguration ceremony earlier this month, Guclu Batkin, CEO, TAV Operation Services enthused: “We have built a strong relationship with SACBO during the last three years and this cooperation has been rewarded with the GIS contract to manage the airside lounge at the airport, as part of SACBO’s expansion plan of Milan Bergamo Airport.” Batkin continued: “Our ‘HelloSky’ lounge is the outcome of an amazing partnership and I thank SACBO’s management for the continued great support, trust, and positive spirit during this development process! We strongly believe that this relationship will keep evolving and more opportunities will rise from it.”

Located on the first floor, prior to passport control, the 600m² landside lounge is open to both domestic and international travellers wanting to benefit from the premium lounge. Inspired by the spirit of Bergamo, including exceptional Italian designed furniture using sustainable materials, ‘HelloSky’ includes spaces to work, relax, eat and drink as well as showering facilities and a smoking room.

Batkin concluded: “Post-pandemic we expect airport lounges to be seen as exclusive zones of the airport with utmost hygiene and health considerations taken into account, therefore, we have created a comfortable safe “oasis” for our guests at Milan Bergamo!” 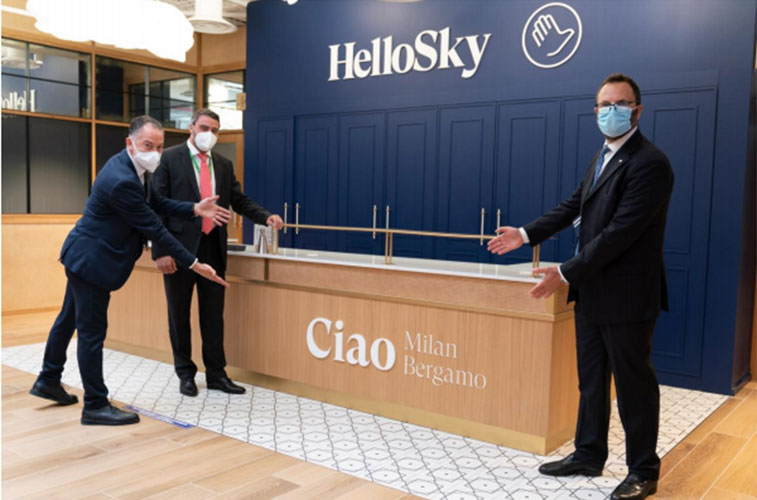 As the airport continues to see demand climb, Milan Bergamo persists in the regeneration of its route map. Among the welcome returns this week was Air Arabia Maroc’s six-times weekly service to Casablanca, following the long-awaited lift of the travel ban to Morocco. Utlising its fleet of A320s, the low-cost Moroccan airline will offer more than 1,000 weekly seats to the economic and business centre of the North African country.

Earlier in the week Air Arabia Egypt resumed weekly links to Sharm El-Sheikh as well as increasing connections to Cairo, while Albawings re-opened flights to Tirana which will see a frequency increase to four-times weekly at the end of July.